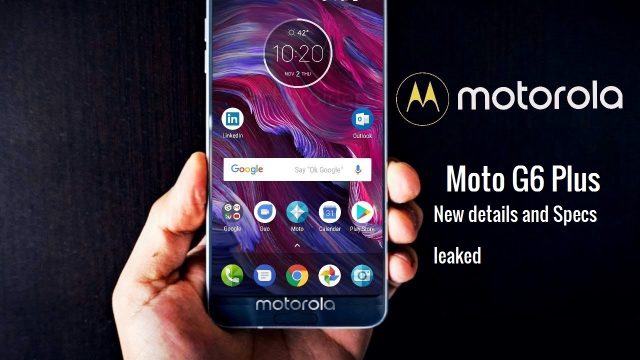 New leaks have appeared for Motorola’s Moto G6 series, which is scheduled to launch this year. A famous tipster, Andri Yatim, has tweeted new information regarding the price and camera specs of the new Motorola Moto G6 Plus.

Apparently, the new Moto G6 Plus will be waterproof and dustproof and it has an IP67 rating.

Another major feature on this smartphone consists of the camera specs, which sound amazing. The Moto G6 Plus will sport a Dual-camera setup; the primary sensor is 12MP with a focus for low-light and an aperture of f/1.7.

The secondary camera is 5MP with an aperture of f/1.9. This is a great combination of the Moto G5s Plus and the Moto G5 Plus, both in one smart device.

The LCD display is 5.99″ wide, IPS and Full HD + capabilities, with an 18:9 aspect ratio. And for the front camera, you get a monstrous 16-megapixel front-facing snapper for super crisp selfies even in low light conditions, because this also has a f/1.9 aperture. And it should get a selfie flash as well.

On the specs side, the Moto G6 Plus will be powered by a Snapdragon 630, and for the first time, the Moto G6 plus will come with 6GB RAM, along with 4GB RAM and with 32GB and 64GB onboard storage.

Apart from that, the battery is said to be at 3250mAh with fast-charging support. Interestingly, the Moto G6 Plus will now also have NFC and the compass sensor, which was missing since 1st Gen of the G series.

Finally, the device will be priced at around $320, which is a good deal for what you’re getting.

What do you think? Will you be getting yourself the new Moto smartphone? Tell us in the comments down below! And as always, stay tuned for more smartphone news!