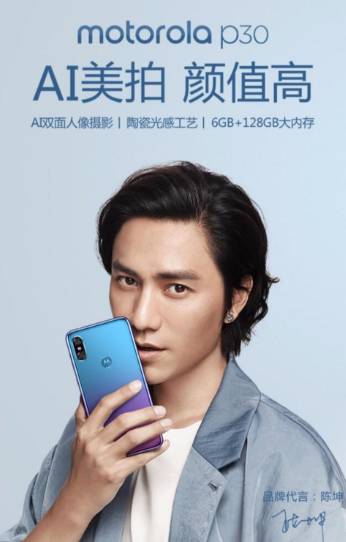 Things have changed for the Motorola brand over the years. Motorola used to be considered one of the biggest smartphone manufacturers in the world, but it was surpassed by the likes of Samsung, Google and Apple. However, this doesn’t mean that Motorola is done with the smartphone industry since the company keeps launching high-end smartphones and a new one has just been leaked!

It looks like someone from Motorola’s PR team has made a big mistake! The smartphone’s promotional picture and full specs sheet have been leaked days ahead of the smartphone’s launch event. With that being said, today we are going to look at everything there is to know about the upcoming Motorola flagship.

Motorola P30 is equipped with a 6.2-inches display that is paired with a 3,000 mAh battery. Furthermore, the smartphone is fueled by an octa-core processor that is bundled with 6GB of RAM for improved hardware performances.

Everyone loves taking selfies and Motorola knows that too well! Therefore, Motorola P30 will ship with a 12MP (f/1.8) front-facing camera. Not just that, but Motorola P30 will also feature a dual-camera setup which comes with 16MP + 5MP lenses that are mounted on the rear side.

As we can see in the featured picture, Motorola P30 will look quite similar to Apple’s iPhone X when it comes to camera placement. However, there is one big difference! Motorola P30 will feature a rear-mounted fingerprint scanner while iPhone X comes with the innovative Face ID technology instead.

On the downside of things, the leaked promo for Motorola P30 doesn’t reveal what the smartphone will look like from the front and we can’t tell if it will have a top-notch display or not. Nonetheless, this information will be unveiled in the upcoming days.