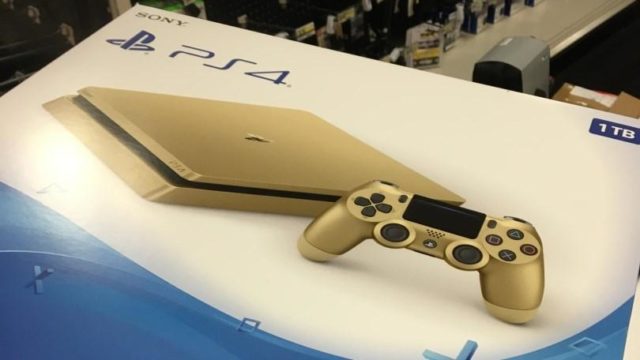 Sony is one of the most well-established tech companies in the world, there’s no denying that. And for sure their most popular product is the PlayStation console, which is now currently at its fourth installment. The PS4 comes in a lot of variants, and a fan favorite is certainly the elegant and slim PS4 Slim, which is more portable than the normal sized one, and a lot fancier looking too. We just love fancy looking devices, don’t we? W

Well, the PS4 is about to become even fancier, because rumor has it that a limited Gold edition is hitting stores next week. According to an unofficial Tweet published by a very excited user, the PlayStation 4 Slim Gold Edition is coming to stores as soon as June 11, and it will cost around 250 dollars. The price tag might seem a bit steep, but we know that special colored editions of things are always a bit expensive, so it’s perfectly justifiable in today’s economy.

However, it’s important to remember that the Tweet came from an unofficial source, so it’s best to take these kinds of leaks and rumors with a grain of salt. For all we know, the user behind it might be just another bored dude that thought it would be funny to create some unwarranted hype around nothing. We’re not saying that he is, but he might be. Anything is possible, so be cautious.

However, we do know what’s coming for sure on June 11: game discounts at Target! So if the PS4 Slim Gold is a hoax, at least we’ll have that as consolation, and a pretty hefty consolation too. Stay tuned next week and see for yourself if the rumors are true.

Do you think the PS4 Slim Gold Edition Tweet is a hoax, or do you think it’s genuine? Let us know.