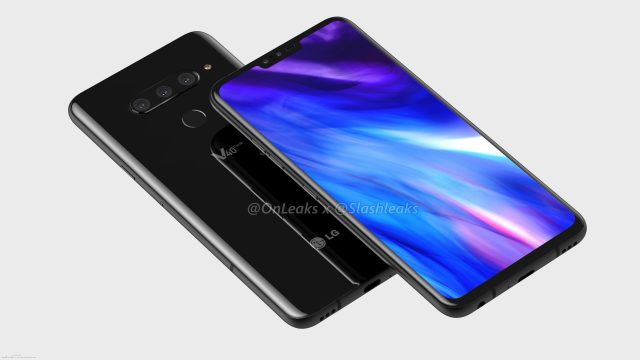 According to the rumor mill, LG V40 is scheduled to launch in October around the same time that Google is planning to launch its next-generation Pixel lineup. Fortunately, a new leak is making those rumors seem true. The leak comes in the form of a short video that gives us a 360-degree view of the upcoming LG smartphone. Therefore, LG has finished designing the flagship smartphone and it’s simply waiting for the right opportunity to launch it on the market.

The video acts just like a press render for LG V40 because it reveals the smartphone’s full design. The feature that stands out the most about LG V40 is the fact that it will be the first LG-made smartphone to ship with a top-notch display. Not just that, but the smartphone will also feature a triple rear camera setup that will help it snap incredible photos.

We need to mention that this video leak comes as a courtesy of the Twitter user @OnLeaks. The leakster says that the video and press renders are all based on the factory CAD blueprint. Therefore, the new leak is as official as it can get.

Even though LG has yet to announce the new smartphone, we already know that it will ship with a massive 6.5-inches display. The display uses P-OLED technology and it offers a high pixel resolution of 1440 x 3120 alongside a pixel density of 495 (pixels-per-inch). In addition, the display is Dolby Vision/HDR10 compliant and it is coated with Corning Gorilla Glass 5.

When it comes to hardware specs, LG V40 will be powered by Qualcomm’s latest Snapdragon 845 CPU which features eight cores that clock at 2.7GHz. Furthermore, the CPU is bundled with 8GB of RAM and an Adreno 630 graphics processing unit.