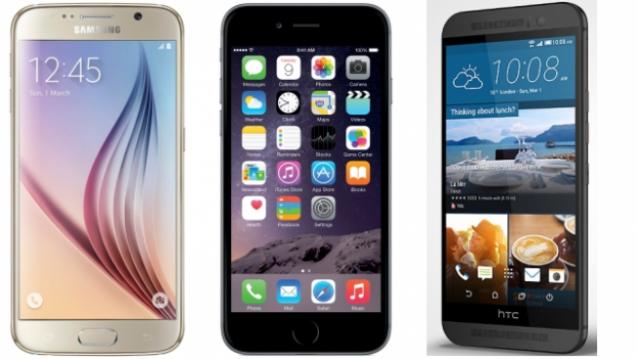 Each benefits from 5″ screen, hardware platform performance and quality camera. Therefore, the mission of the buyer to choose a product over the other becomes very difficult. Price is certainly important, but there are other factors that contribute to a final decision, such as design or customized Android.

In this article we present the main features of the four mobile brands and how they are trying to stand out to attract the attention of buyers.

Building materials are the most diverse among these phones. 5X Nexus is uses a housing made of polycarbonate, while HTC One M9 is made of aluminum. Instead, Sony Xperia and Samsung Galaxy S6 Z5 chose to make the back cover out of glass, which means a higher retention of fingerprints and dirt, and also an increased fragility in use. All have an elegant design, unibody, which on the other hand does not allow battery replacing.

In terms of dimensions, the four are very similar, with differences of less than a millimeter, but the weight varies significantly: if 5X and S6 are under 140 grams, while the other two pass the threshold of 150 grams.

About the screen, the differences appear rather to technologies used, whereas diagonal is 5 “- 5.2”, and three devices have Full HD resolution. Samsung chose to equip SGS6 with QHD resolution, one that is difficult to distinguish when compared with Full HD. Therefore, the South Korean product does not necessarily have an advantage in this area. SGS6 SuperAMOLED screen is suitable for those who prefer more saturated colors, while One M9 and Z5 relies on various LCD (SuperLCD3 or IPS).

In terms of hardware platforms, the differences are rather minor. Galaxy S6 gave up Qualcomm for the Exynos 7420 chipset using the same ARM quad-core processors as the Qualcomm Snapdragon 810 chipset found inside his M9 and Xperia Z5, so the performances are similar, especially since all three have 3 GB RAM.

At first glance, it seems 5X Nexus is slightly disadvantaged because it relies on a Qualcomm Snapdragon 808 chipset and “only” 2 GB RAM. Unfortunately, the same can be said about the minimum memory capacity: 5X offers only 16 GB basic amount, and it starts to become insufficient for top users, especially since all the other smartphones start at 32 GB.

Connectivity is top for all producers with Wi-Fi, 3G, 4G with speeds up to 300 Mbps, Bluetooth, GPS with Glonass and NFC.

The camera has undergone significant changes for two of the four phones. Following numerous criticisms received for One M7 and M8 One, HTC gave up UltraPixel for a 20 MP normal sensor, but it did not get adequate performance of this segment. Sony also introduced important changes and attacked the market with a 23 MP sensor, while Galaxy S6 uses a more “earthly” 16 MP camera. As usual, the Nexus 5X is modest in this area, as the sensor has 12.3 MP. In the past, phones launched by Google have been criticized for modest quality photos.

At the software level, Nexus 5X is the first to use the new Android 6.0 Marshmallow operating system, while the rest use Android 5.x Lollipop at the moment, but will receive the update to the latest version, sooner or later.

Autonomy remains one of today’s main problems, and manufacturers contribute to it by going for a slim design in the detriment of a larger battery.

So, the Xperia Z5’s 2550 mAh, the Nexus 5X’s 2700 mAh and SGS6 and One M9 approximately 2900 mAh are sufficient for a normal day and possibly a bit more, depending on the degree of activity.

For top mobile fans there are many alternatives to choose the right smartphone, whether you prefer a device made of glass, metal or plastic.

If hardware platforms are largely similar, choosing a phone to the detriment of the other will be mainly based on design, functionality (or not) to the Android OS or camera performance.

Finally, the price will have an important role in the final decision, especially because in this chapter the differences are still very large, because Nexus aims to lower costs and because some products already on the market for a few months.