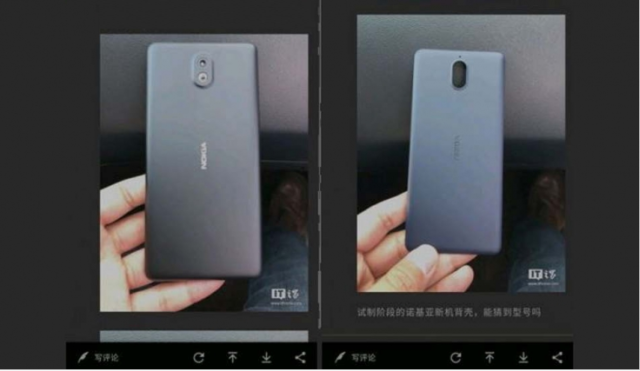 Nokia has been making huge waves in the smartphone market ever since it was acquired by HMD Global. It seems like HMD Global plans to flood the market with new devices every year and this year, something big is coming for Android fans. Even though Nokia is doing its best to not leak information about its upcoming devices, someone managed to get their hands on valuable information about an upcoming Nokia 1 which will run on Android Go.

The two hands-on pictures we can see in the featured image show us how Nokia 1 will look with and without a back cover. This image was leaked on the Chinese microblogging website known as Baidu and it gives us a glimpse of what’s to come. What’s interesting is that the internet has been buzzing with rumors about a new Nokia smartphone these past few months but now, we finally have some proof.

According to another set of leaks which surfaced on the Chinese website, Nokia’s upcoming smartphone will ship with a rear-mounted single camera that’s fitted with LED Flash. Furthermore, Nokia 1 will be fueled by a Qualcomm-made Snapdragon 212 processor which will be paired with 1GB of RAM and 8GB of internal storage space.

While the storage space might seem like too small, Nokia fans shouldn’t worry because it can be expanded up to 256GB via a microSD card. Moving on, Nokia 1 will ship with a full HD display that’s able to offer a pixel resolution of 1280×720.

If we take a closer look at the leaked pictures, we can see that Nokia 1 is made from plastic. This tells us something important, Nokia 1 will be really affordable. In addition, the Android Go operating system has been specially developed for lower-end smartphones and this also leads us to believe Nokia 1 will ship with an affordable price tag.