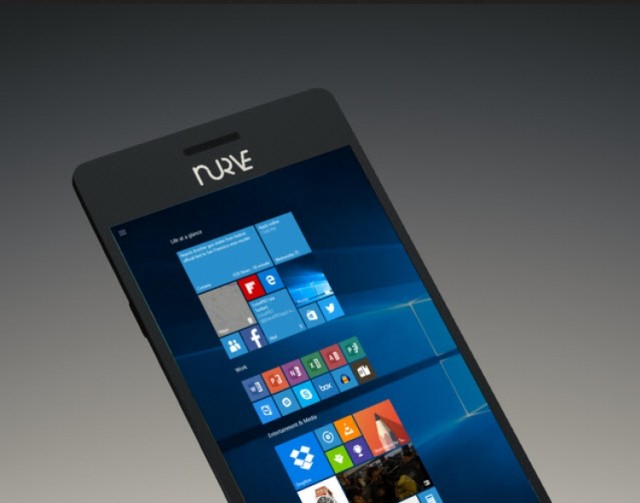 Microsoft offers those who want to use their phone as productivity tool the ability to turn their Lumia 950 and 950 XL into Windows 10 PCs using the Continuum function, but those dissatisfied with its limitations should consider the SyncPhone. This is a Windows 10 based smartphone (the desktop version, not mobile) that is designed to replace PC, tablet or phone.

Nurve, a newly founded American company, launched on IndieGoGo the SyncPhone project, which aims to put fully equipped PCs in the pockets of its users. SyncPhone will run a complete version of Windows 10, which means that desktop applications can run smoothly alongside the universal Windows Store apps. This is possible thanks to the Intel Atom chipset found on all three models of the SyncPhon: the classic model, the S model and the top version, called “Pro”.

All SyncPhone smartphones are built with a 5.4″ HD resolution displays. The basic model is a smartphone with Intel Atom Z8300 X5 which may reach a frequency of 1.84 GHz in full load, 2GB RAM, 32GB of storage space and 8 megapixel camera. It has a microSD card slot, but doesn’t come equipped with a stylus. SyncPhone S has the Intel Atom Z8500 X5 (2.24 GHz) chipset, 64GB of storage, 4GB RAM and a 12 megapixel camera, along with a stylus. The Pro version comes with twice as much storage space than the previous version, offering 128 GB of storage and 8GB of RAM, it also has a more powerful processor, the Intel Atom Z8700 2.4GHz-x7 and comes equipped with a stylus.

All three devices are built within a unibody enclosures made of aluminum, which has a support to position the phone on the desk. It has Type-C USB standard charging port and the phone also features a Micro-HDMI port for connecting it to a monitor when using it as a computer.

Prices are attractive on IdieGoGo for pre-order. SyncPhone, the basic model is available now at $300, the S model at 360 dollars and 500 dollars for the Pro model. Prices will increase when they enter the stores, SyncPhone classic is said to cost $390, $400 for the S model and $700 for SyncPhone Pro.

The company intents to raise $750,000 to begin the production of the SyncPhone and will deliver the first units in February 2016.