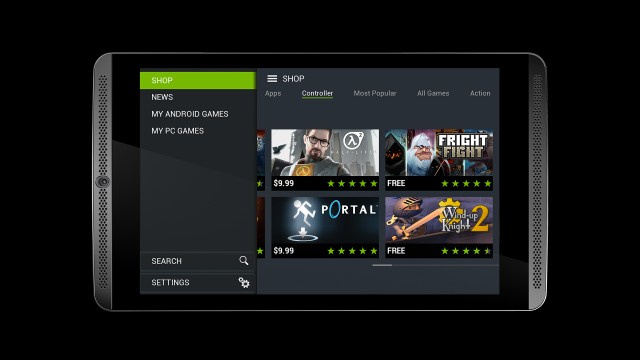 Android gaming enthusiasts, in order to exert their passion, can now turn towards purchasing a K1 NVIDIA Shield tablet.

It is likely that in past years we have heard of NVIDIA Shield devices, they were meant for gaming and had a very attractive design. In addition, they were provided with a gaming controller to facilitate user experience, more similar to that of the console gaming.

NVIDIA Shield Tablet initially launched last year and has sold quite well, unfortunately, due to problems with the batteries in them, many units were called back to the factory. Also at that time, there were not many new units sold. Because there is still demand for such gaming devices, NVIDIA announced today its new K1 Shield Tablet, aesthetically very similar to the first model a year ago. But there are some discrepancies that we should not overlook. In principle, we are still talking about a tablet with an 8-inch Full HD display and a NVIDIA Tegra K1 processor with 2GB RAM. The preinstalled operating system is Android 5.1.1 lollipop, but there are already promises of an update to Android 6.0 Marshmallow by the end of this year.

Now let’s focus on the downsides. NVIDIA Shield K1 no longer comes with a stylus and no longer has housing for hosting such an accessory. The tablet supports one because of DirectStylus technology, but will have to purchase one separately if you want to draw. In addition, or rather on the downside, the tablet is only available with WiFi, without 3G or 4G and with only 16GB of storage space, the good part is that it only costs you $200 if you want to invest in one.