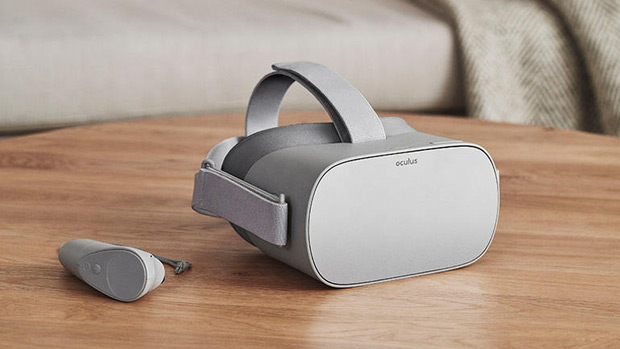 Oculus Go VR Headset will be released in May and its goal is to be the first fully autonomous brand model that operates independently of a smartphone or computer. Above all, it will cost less than $200.

Oculus Go will come in two versions, both powered by Qualcomm Snapdragon 821

Equipped with a 2560×1440 WQHD LCD with a 110 degrees field of view and an integrated spatialized sound system, it allows 3 degrees of freedom to move the head but does not follow the movements.

In addition, Oculus made sure to make this headset compatible with Samsung’s Gear VR applications (co-developed with Oculus).

According to the approval documents sent to the Federal Communications Commission (FCC), there will be a 32 Gb version and a 64 Gb version. This would be the only technical difference that should distinguish the future Oculus Go models.

During the CES Qualcomm founder’s conference, Hugo Barra, vice president of virtual reality at Facebook (owner of Oculus), revealed that this new product was designed in partnership with Xiaomi (of which Barra was employed).

Thus, Oculus Go will be powered by a Qualcomm Snapdragon 821 processor, identical to that found in the LG G6 or the first Google Pixel.

According to some recent statistics, VR headsets market has passed 1 million units sent to distributors in the third quarter of 2017, for the first time since this technology has emerged.

However, these figures are due to the frenzy surrounding the Sony PlayStation VR which represented almost half of the VR market sales – 490,000 or 49% of the market share.

The Sony PlayStation VR took full advantage of the success of the PS4 console with which it operates. Besides, it is also sold at an affordable price.

On the second step of the podium, we find Oculus with 210,000 Oculus Rift VR headsets, representing about 21% of the market share.

In conclusion, Oculus Go VR Headset will be released in may and will cost less than $200, facts which, hopes Oculus, will gain for it a significant market share this year.