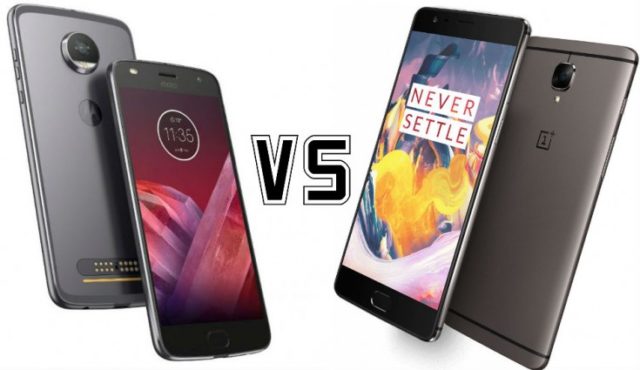 Motorola latest modular smartphone Moto Z2 Play launch is set for July, creating an opportunity for comparison between its features and counterpart smartphones. Since crown jewel 3T scores high for similarities, this article is going to talk it through and have a go at deciding which one of these two deserves the win in the eyes of highly critique customers and tech-savvy.

Appearance-wise, both phones share the aluminum unibody, but it’s the OnePlus 3T that seems to be designed for a comfortable hold throughout the day, while Z2 Play’s logo, a bar of sixteen pogo pins and the camera frame might bring some inconveniences here and there.

Motorola’s Z2 Play is slightly thinner with its 6mm if we measure it against OnePlus 3T’s 7.4mm thickness and has a water-repellent quality given by its nano-coating and can camouflage its antenna lines too. It seems like the OnePlus 3T is losing points, but let’s not ignore the practicability of having an “Alert Slider” and how that is a time saver.

Both phones give the experience of an eye-catching display of 5.5-inch Full HD AMOLED panel, with rich colors and immaculate angles. Surprisingly, Moto Z2 Play seems to lack the same quality for outdoor visibility that 3T has.

In the hardware department, we face more relevant differences and we’re starting off by having a look at Moto Z2 Play’s features. It comes packed with a Snapdragon 626 processor, 4 GB of RAM, 64 GB internal storage, Adreno 506, Turbo Charge technology and 3000mAh fixed battery. It supports Dual-Sim and Bluetooth 4.2 connectivity, has a Type-C port, 4G LTE and NFC.

After listing both phones hardware’s properties and mentioning Z2 Play’s MicroSD card slot and its function Moto Mods for outer accessories, it is still obvious how OnePlus 3T seems to be better equipped and wins in terms of raw specifications.

In the software department, things get slightly easier, and we’re starting off by mentioning Nougat’s Android (7.1.1) feature on both phones. Moto Z2 Play has a couple of useful features like hands-free voice and runs on a near-stock software. As for OnePlus 3T, it comes with the most polished variation of OxygenOS so far, piled with a bunch of cool customizable options.

In conclusion, both phones are packed with capable software features, but it could be that OnePlus’ skillful maker might be a better choice.

Motorola’s products are known to deliver good performance results, but in this circumstance, 3T seems to have a better go at winning due to its reliable options. Its battery seems to be superior too, charging in about an hour, while Moto Z2 Play needs another thirty minutes to be completely loaded and with that OnePLus 3T wins.

And we’re finally having a look at both phones cameras, which is what we really wanted to know the whole time. Which one gets the better pictures?

3T comes with a 16-megapixel rear sensor camera of f/2.0 aperture, an Optical Image Stabilization option and a lens of 16-megapixel front-facing f/2.0. Moto Z2 Play’s camera is packed with 12-megapixel sensor, dual-tone flash, and a 5-megapixel f/2.0 lens. Both of them can record 4K footage at 30 frames per second.

It seems like OnePlus 3T’s camera is doing better.

With Z2 Play’s “Moto Mods” feature, buyers have the experience of modifying their gadget into whatever they want it to be and serve for, making this phone a treasure for tech-savvy customers. On the other hand, practical and reliable OnePlus 3T can be just as good to invest in.