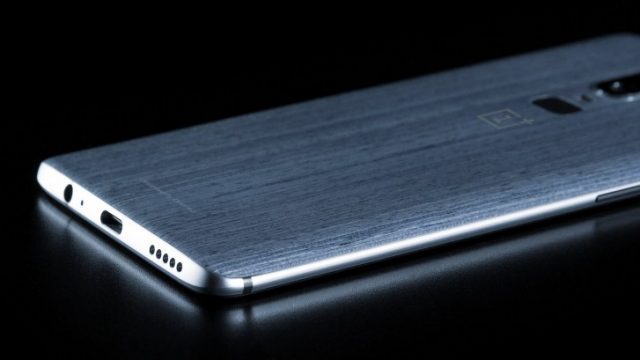 Considering that OnePlus 5T is one of the best smartphones that the market has to offer, we think it’s safe to say that the expectations are really high for the upcoming OnePlus 6. Even though OnePlus 6 is expected to come out in June, the internet is buzzing with leaks and rumors that give us an idea of what to expect.

The first thing that stands out about the recently leaked OnePlus 6 picture is that it features a woodgrain back. This texture is quite interesting and it’s surely going to make OnePlus 6 feel good in the owner’s hands.

The second most important feature that we can see in this leak is the rear mounted fingerprint scanner. Obviously, OnePlus 6 will feature a bezel less screen and this gave start to some rumors that said the fingerprint scanner will be embedded beneath the display. Well, it looks like those rumors proved to false.

Even though OnePlus 6 will ship with a bezel less screen like iPhone X, it looks like OnePlus 6 is not going to copy its full design. The reason we are saying this is because the new OnePlus 6 leak shows us that its bottom side features the classic 3.5mm auxiliary jack.

Despite popular belief, we think this feature is going to attract customers towards OnePlus 6 because it gives them the option to connect all types of headphones to it. We should also mention that the smartphone features a USB-C port on the bottom side.