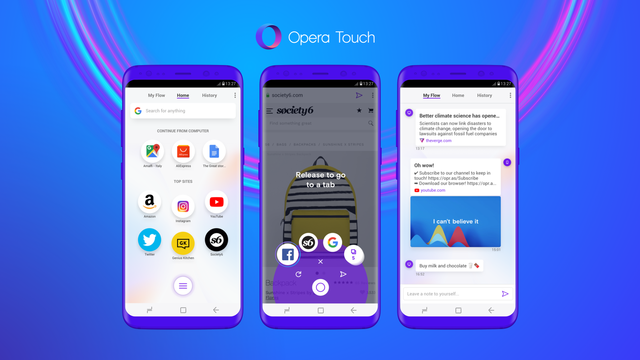 Revealed last year, Neon came up with a number of new ideas, better suited to how users use the internet. Neon was implemented around a more user-friendly interface with tabs that can be displayed next to each other, like the windows in the Microsoft Windows OS.

Launched first in the Android version, Opera Touch takes over the concepts already presented in the Neon version and adapts them for touch interaction using the smartphones’ screen.

With an unconventional interface for a mobile browser, the new browser puts the tab switch and bookmark list at the bottom of the screen closer to your fingertips.

The suggestion button called “Fast Action” provides quick access to the search function, tabbed list and other essential features available in the browser.

Besides the optimized interface for fast navigation, using as few touches as possible, Opera Touch benefits from all the technologies available in the full version of the desktop Opera browser, such as integrated ad blocker and protection against sites that use harmful plug-ins.

This new version of the Opera browser for mobiles supports synchronization with the Opera version for desktop, saved passwords and bookmark files data being automatically switched between devices.

Named “Flow,” the synchronization feature only involves using your smartphone to scan a QR code generated in the Opera browser for the desktop.

Still being at an experimental stage, this new Opera browser for Android does not include a fully-functional bookmark manager or the ability to save new bookmark files, allowing users to handle only a list of newly visited sites, which is automatically generated.

Thus, at the moment, Opera Touch is best used in tandem with the Opera version of the desktop, until it will be fully functional on its own via future updates.