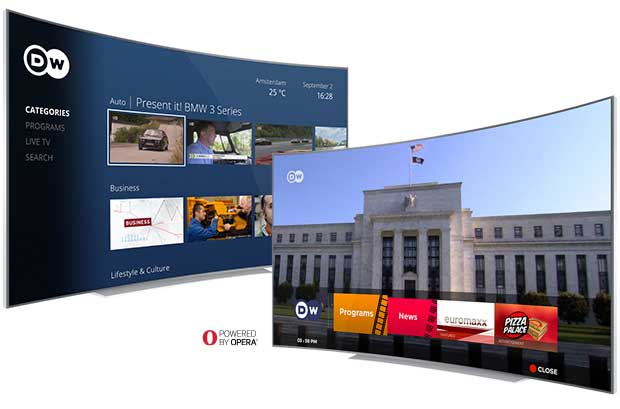 Few people know that Opera developed a software solution for smart TVs, but the company hopes to soon see in stores increasingly more Smart TVs based on Opera TV. Its software has reached version 2.0 and is ready to be adopted by as many manufacturers of televisions as possible, promising advanced software support thanks to HTML5-based applications that can be achieved by a large number of developers.

The fact that all applications will be based on HTML5 offers the company the opportunity to offer solutions in the form of proprietary APIs for delivery of advertisements and payments. Opera already has an online advertising platform called MediaWorks, which operates approximately 19,000 sites at the moment, and a certified PayPal payment solution, which can be integrated directly into applications.

The Opera browser can already run applications that serve video on demand, which is also compatible with Opera TV platform. Among them are found CinemaNow, Crackle, Red Bull, IGN, TED, Young Hollywood, Washington Post and several other services. Related applications will increase as the platform is gaining popularity, but is quite thin ahead of the competition.

On the Smart TV market today are already major players like Samsung and its operating system Tizen, LG and webOS and also Opera from Internet browsers, Mozilla and its Firefox OS’s. Apple and Google are also present in this niche but offers no TVs, only devices running video content and games using tvOS and Android TV platforms.

The first Opera TV will be delivered in the first quarter of 2016 following the other companies to bring such devices on the market during this year.