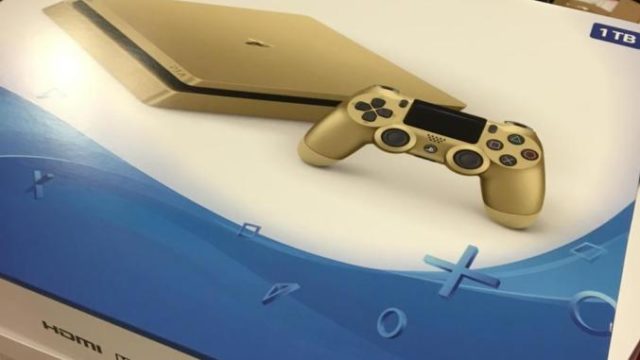 It seems that Sony is currently working on launching a gold variant of the PlayStation 4 Slim console. A photo has just been leaked over the internet, showing the packaging of a PlayStation 4 console having a gold color. This photo has been shared by Sliye from Reddit, who also claimed that the console will actually be released on June 9, 2017.

According to the leaked picture, it seems that the gold variant of the PlayStation 4 Slim will come with a 1TB hard drive, but it is not sure yet if this is the only option that will be made available (we remind you that the black version of the PS4 Slim comes in two HDD variants of 500GB and 1TB).

Unfortunately, Sony has not officially confirmed that it will release a PlayStation 4 Gold Slim Edition, but Sliye claims that he is working at US retailer Target and that the color variant shows up in the store’s internal system.

If the leak turns out to be true, it’s unclear if the new edition of the console will be released only in the US or worldwide. We remind you that there were times when Sony has decided to release different PS4 versions for some specific territories only.

There were times when the company has released the PS4 versions in some territories a bit later than others, so it is not yet sure if the PlayStation 4 Gold Slim edition will be available in your country on June 9, 2017 or it will arrive later.

For now, the PlayStation 4 Slim is available in two colors: glacier white and matte black. However, in Walmart (US) there is an exclusive PS4 Slim Call of Duty: Infinite Warfare bundle, which you can purchase.

We remind you that in the past, Sony offered a limited run of gold-colored PlayStation 4 consoles in the US, but they were exclusive via a competition with fast food chain Taco Bell.