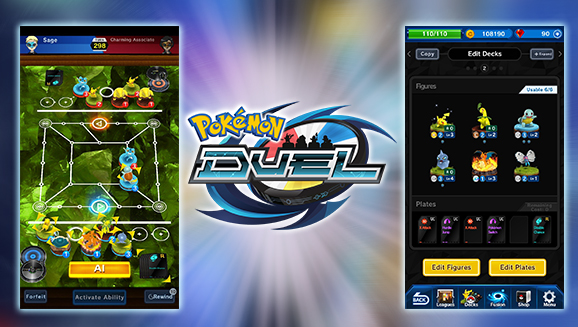 Pokemon is the animated TV series that we all grew up watching. This is the main reason why the Pokemon franchise is so large nowadays with Pokemon Go being ranked as the most downloaded mobile game ever. However, the Pokemon franchise doesn’t stop there since there are tons of other amazing Pokemon-themed games and Pokemon Duel is a great example of that.

Just like Pokemon Go, this game is directed towards fans of the animated series who want to live their childhood dream of becoming a trainer. The difference between Pokemon Duel and Pokemon Go is that this game is more strategic and its based on building powerful decks.

Another great thing about Pokemon Duel is that the game allows players all over the world to duel in card games and receive points which rank them in Leagues. This feature gives the game a competitive feel and it also makes it more fun for players to compete.

The reason why Pokemon Duel is in our sights today is because a brand-new update just arrived. This is a major update which weighs in at 58.07MB and it is targeted towards Android 8.1 Oreo powered devices. On the other hand, the update can also be installed on older devices since it requires a minimum of Android 4.1 Jelly Bean.

Pokemon Duel fans should be happy to know that this brand-new update is packed with content updates. The game’s developers are always looking to keep the game fresh so that players never get bored with it and this latest content updates add some cool cards to the game.

Last but not least, the update is also packed with a handful of bug fixes. While these bug fixes might sound as important as new features, they are actually highly important because they ensure that Pokemon Duel doesn’t crash or malfunction.