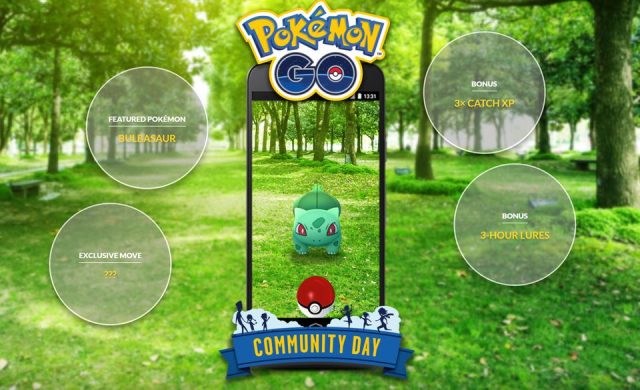 As previously reported, Pokemon GO’s next real-world event is here! The third installment of Pokemon GO Community Day is happening today, Sunday, March 25th! Players will have the chance to earn bonuses and capture rare Pokemon, including one that may know an exclusive move!

Just like the other two Community Day events, this month’s will take place within a three-hour timeframe, which is dependent on where you live on the globe.

For the United States, the event begins at 11 AM Pacific Time / 2 PM Eastern Time, and it will keep going until 2 PM Pacific Time/ 5 PM Easter Time.

In Europe/Africa, it runs from 10 AM to 1 PM UTC; For the Asia-Pacific region, the event is happening between 12 PM and 3 PM JST.

During these 3 hours, you earn triple the normal amount of XP for every captured Pokemon. That means that if you activate a Lucky Egg during the event, you can earn up to six times the usual amount of XP! Additionally, Lure Modules will last for 3 whole hours.

This month’s Community Day event Pokemon is a classic: the Kanto Grass-type starter and the Seed Pokemon, Bulbasaur! It will be spawning way more often during the 3 hours the event takes place.

On top of all this, the Easter-themed Eggstravaganza event is also going on right now!

From now until April 2nd, Pokemon which would hatch from 5km/10km Eggs (e.g. Ralts, Wynaut) will have a chance to hatch from 2km Eggs. Additionally, specific Pokemon like Pichu or Togepi will hatch more often. Every Egg that hatches until 2nd of April will also hold extra Candy!

The third major event going on is that the Legendary Pokemon, Lugia, is still available! The Psychic-type Pokemon will appear in Raid Battles until April 2nd, too.

This is the second time it appears in game, except now it knows the “newly improved” Flying-type move, Sky Attack.

Also, this time Lugia will be easier to catch than in the previous event. That is, if the players participating in the Raid Battle manage to defeat it.

What are you waiting for? Go out, catch, and hatch yourself some new Pokemon! And stay tuned to News4C for more Pokemon Go news!