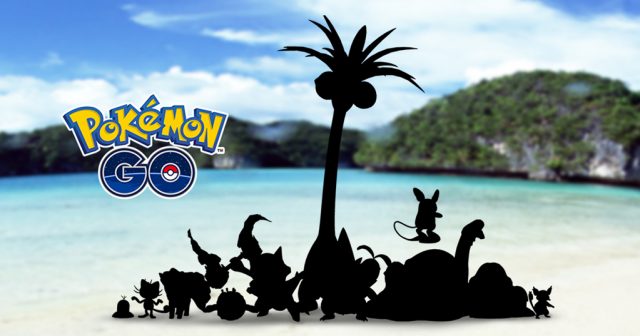 Niantic Labs begins the week with an unexpected new addition to the Pokemon GO video game. The developer of the game confirmed through its official blog that Pokemon GO will bring the Alola forms Pokemon discovered in the Kanto region in the Pokemon Sun And Moon.

“Sunny days are coming! Whether it’s your weather forecast for rain or shine, we’re celebrating around the world with some special Pokemon from the tropical Alola region on Pokemon GO. Prepare to meet some of the Pokemon originally discovered in the Kanto region now in their Alola forms,” says the announcement.

“These unique variants were first seen in the Pokemon Sun and Pokemon Moon video games and will be released on Pokemon GO in the coming weeks,” the blog post adds.

It should be remembered that some Pokemon such as Rattata, Raticate, Marowak, Grimer, Muk, Raichu Exeggutor, among others, present different forms and therefore new skills to those already known in the Kanto region.

Also, these Pokemon characters are of a different color from those in their original region. Many of them have changed due to the weather conditions in Alola.

When will Niantic add the Alola Pokemon from Pokemon Sun and Moon to Pokemon GO?

Niantic hasn’t announced yet an exact date when the Alola forms Pokemon from the Kanto region from Pokemon Sun and Pokemon Moon will be available in Pokemon GO.

However, some rumors say that most likely this will happen during the summer.

On the other hand, Niantic hasn’t revealed how many Alola forms Pokemon will be added but in the teasing image there are 11 such figures.

In short, Niantic decided to add Alola Pokemon from the tropical region Kanto from Pokemon Sun and Moon in Pokemon GO, apparently, to bring back some of the gamers who ditched playing.