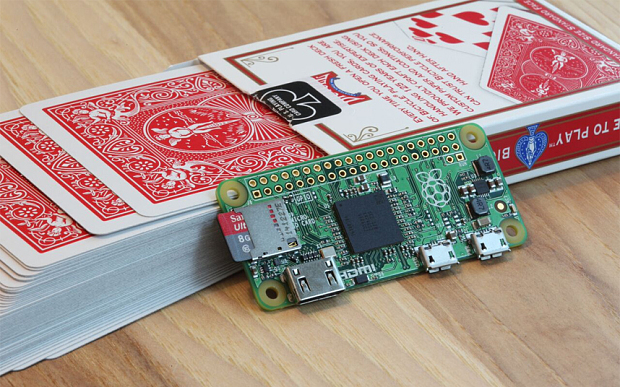 You want the experimental Raspberry Pi software but do not want to risk 20-30 euros to buy one? Well Raspberry Pi Foundation has launched an even cheaper product. It is the Raspberry Pi Zero, a smaller version with reduced functionality compared to his older brothers, but it may be the perfect starting point on the way to developing new software and hardware.

Although the new Raspberry Pi Zero device is smaller than a credit card, it manages to be stronger than the initially Raspberry Pi model launched several years ago. It has the same processor, Boardcom BCM2835, but running at 1 GHz (40% faster than the old Pi), has 512 MB RAM DDR2 (double than the first Raspberry Pi) and comes equipped with a microSD port, mini-HDMI which supports 1080p 60Hz, two micro-USB ports and a 40-pin GPIO header, consistent with the previous versions. With dimensions of 65mm x 30 mm x 5 mm, this computer can be easily carried in a wallet.

The price for this model is $5 and the Raspberry Pi Foundation promises compatibility with the Linux Raspbian operating system, already running on other Raspberry Pi models. Pi Zero is a first for the IT industry, it is the first computer that is given for free with a magazine. Those who subscribe to the magazine Magpie or living in the United States and in the United Kingdoms, will get a Zero Pi computer stuck on the magazine’s cover.

The new Pi Zero has just been launched and it is already depleted from the stock of the Raspberry store. Raspberry Pi, will certainly return to the virtual shelves once more as it leaves the factory units. Who would have thought 10-15 years ago that the performance of a bulky PC, costing hundreds of dollars will be exceeded by a mere $5 integrated plate?