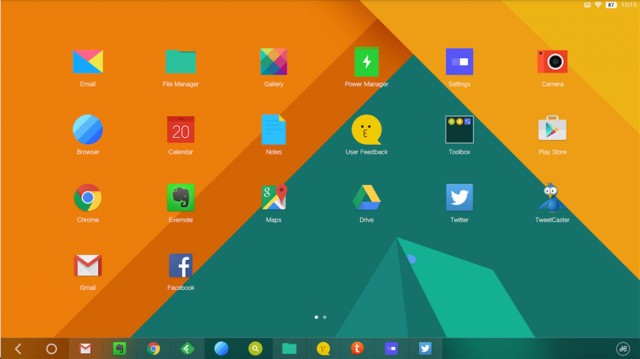 Android platform is generally associated with mobile devices, is now prevalent on tablets and mobile. There were a few “fixed” devices with Android, but these have shown that touch interface does not mix well with office work. Jide believes that Google’s operating system can meet all the usual functions offered by Windows, Linux or Mac OS X, but the interface must be adapted to the needs of a PC user. This way was created Remix OS, a custom Android that can be tested right now on any PC.

Version 2.0 alpha of the Remix OS was announced last week at CES 2016 and has already been released for download to anyone who wants to test it. It can be installed on a stick and can run on any computer that enables the operating system to boot from USB. The system requirements are quite low, we are talking about a mobile operating system running on a desktop device, provided the use of a USB 3.0 stick with the speed of 20MB / s write.

The Remix OS project is implemented in partnership Android-x86 project, which has ported Android on x86 processors. The installation is done on the portable storage unit, which means that you can have the same operating system on any computer, with the same settings, without changing operating systems already installed on it. Remix applications running on Android OS and are not displayed in full screen, but in windows, like Windows Store applications on Windows 10.

Speaking about the interface, it is worth mentioning that it resembles that of the recent versions of Windows. There is a home button, a taskbar with opened applications and notifications and quick settings area in the bottom right corner. Remix OS can be downloaded from the official website, where you will find the instructions for installation. The operating system is completely free and will remain free even when it would be released in a final version.