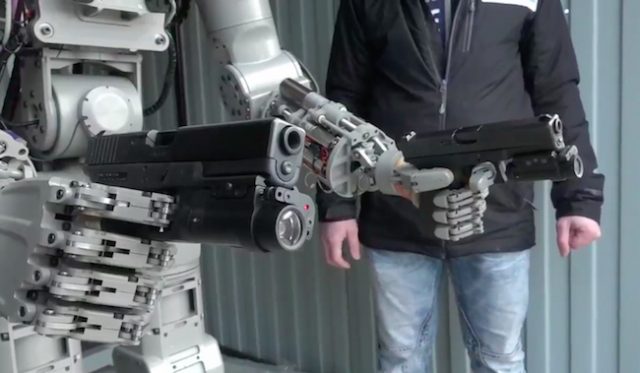 We live in the age of technology and the fact that Russia has managed to create a robot that’s able to shot guns should not surprise anyone. Especially since Russia always prides itself in being one of the biggest army powers in the world. Nonetheless, Dmitry Rogozin who is Russia’s deputy prime minister recently uploaded short video which showcased a Terminator looking robot. Even better, Dmitry Rogozin wrote the following text next to the video “Russian fighting robots – guys with iron nature”.

Russia is no stranger to warfare and technology which is the reason why it has created this innovative robot. The robot has been named as F.E.D.O.R. and he stands on two legs and shoots weapons with two hands. When the video first came out, the entire world started panicking and thinking that Russia wants to create an army filled with robots and attack its neighboring countries. Russia’s deputy prime minister quickly reacted to that and posted the following on his social media account “We are not creating a Terminator, but artificial intelligence that will be of great practical significance in a lot of spheres”.

In the past, wars were fought by men equipped with guns and swords but things are looking to change. If Russia was able to create this type of warfare focused robot, we can be sure that other technology advanced countries such as the US will do the same. However, Russia’s robot doesn’t look ready for combat yet. It’s rather immobile and no one can know if its software is secure enough and that it will not go in overdrive and shoot everything around it.

Everyone has seen SCI-FI movies which showcase system malfunction in combat robots such as the Terminator. Therefore, we can be sure that no one is going to be comfortable to have an armed robot in their vicinity. Let’s just hope that Russia keeps this robot in the experiment phase and doesn’t get any ideas of using it for war purposes.