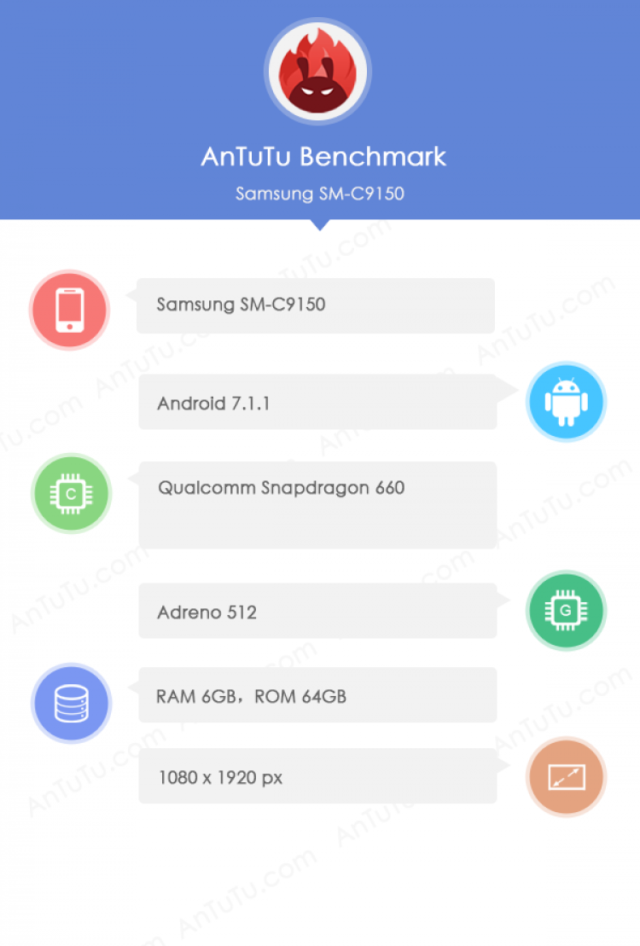 Samsung holds the title of being the world’s biggest smartphone manufacturer and while most people would attribute this success to the company’s latest Galaxy S8 and Note 8, there’s a slew of other high-end Samsung-made smartphones that people can choose from.

The South Korean tech giant loves to create smartphones that range from low-end and affordable to premium pieces of technology like the innovative Galaxy S8. But what’s in between? Well, this where the upcoming Galaxy C10 fits in.

Even though the release date of this smartphone is unknown as of now, we already know a great deal about it. First off, Galaxy C10 is going to fit in the mid-budget price range.

However, this doesn’t mean that Galaxy C10 will not be able to compete against the likes of Galaxy S8 and it will actually give it some tough competition because its equipped with impressive specs.

Talking about Galaxy C10’s specs, we got lucky and the smartphone was spotted on the ANTUTU benchmarking website. Without any further ado, let’s see what hardware specs Samsung’s upcoming mid-budget ranged smartphone will have to offer.

Samsung loves to collaborate with Qualcomm and this can be seen in Galaxy C10’s configuration as well. The upcoming smartphone will be powered by one of Qualcomm’s octa-core Snapdragon 660 CPUs. Things get even better than this since the processor will also be paired with the whopping amount of 6GB RAM.

Furthermore, Galaxy C10 will ship with a display that measures in at 6.0-inches. The panel will feature Super AMOLED technology and it will offer a full HD pixel resolution of 1080 x 1920,

The operating system plays an important role when it comes to user experience and performance. Therefore, Samsung fans who are interested in purchasing the not-yet unveiled Galaxy C10 should be happy to know that Samsung equipped the smartphone with Google’s Android 7.1.1 Nougat.