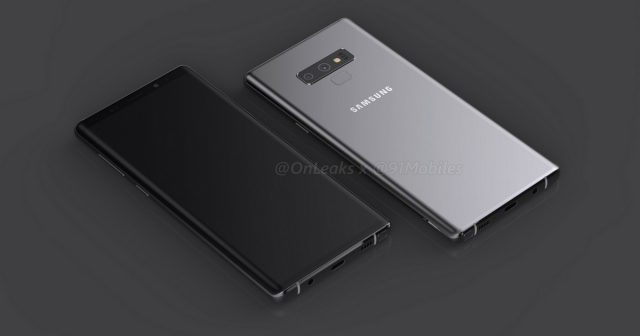 This year is looking great for Samsung fans. The South Korean tech giant launched the highly popular Galaxy S9 and the smartphone is fantastic. However, this is not where the good news end because Samsung fans should also get ready for Galaxy Note 9, the true Samsung flagship smartphone.

Samsung has yet to unveil the smartphone officially or to announce when it plans to launch it. Luckily, we don’t have to wait for that to happen in order to see how Galaxy Note 9 will look like and what type of specs it will feature because a leakster managed to get his hands on official press renders of the device.

As previously mentioned a leakster managed to find an official press render of Galaxy Note 9. The leakster is known as “Onleaks” and he has a good track record of predicting when tech gadgets will launch and what type of features they will offer.

Nonetheless, the leaked press render shows us that Galaxy Note 9 will feature a premium design that’s paired with a sleek looking Infinity Display and thin bezels. Just like Galaxy S9, the Note 9 will feature a dedicated physical Bixby button and it will still ship with the classic 3.5mm audio jack.

Another exciting thing feature that can be spotted in this leak is that Galaxy Note 9 features a silo for an ejectable S Pen. We should also mention that the fingerprint scanner has been moved beneath the horizontal rear-mounted camera setup.

Moving on from the leaked press render, Galaxy Note 9 is expected to ship with the latest version of Qualcomm’s octa-core Snapdragon 845 CPU that’s paired with 6GB of RAM and a 256GB ROM. In addition, there will also be a Galaxy Note 9 variant that’s powered by an Exynos 9810 CPU.