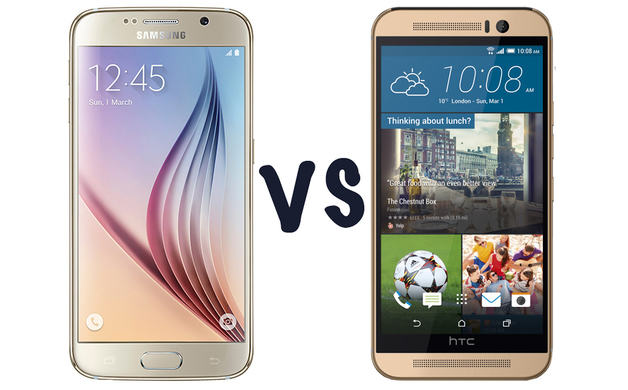 The top smartphone segment now includes, among others, two of the most desired devices available on the market: Samsung Galaxy S6 and HTC One M9.

Until recently, phones from Samsung and HTC brands were relatively easy to distinguish particularly in design but also in terms of camera technology, but now the main differences come from hardware platforms.

Therefore, the task of differentiating the two smartphones from Samsung and HTC brands has become more complicated, and choosing one over the other is not as simple as it seemed in the past.

Therefore, in this article we focus on differences between HTC One M9 and Samsung Galaxy S6 to help you make a better decision because, from many points of view, Samsung Galaxy and HTC One M9 S6 are very similar when it comes to technical specifications.

Samsung Galaxy S6 brings a new design concept that comes in response to criticisms from users. The plastic was left aside to make way for glass panels on the front and rear which are joined in a metal frame, elements that make the phone look better. Instead, HTC One went for a design almost identical to its predecessor with unibody metal casing and two speakers that provide a superior sound quality.

Until recently, it was almost the same hardware platform for all top mobile devices. But now things are changing here: Galaxy S6 renounced Qualcomm in favor of their own chipset, Exynos 7420, while HTC M9 uses Qualcomm’s Snapdragon 810 chipset. The Exynos 7420 is built with 14 nm technology, however, it has the potential to reduce energy consumption and thus improve autonomy, an element that, if checked in practice, will bring great benefit to the South Korean manufacturer.

The camera could be the area where the two smartphones are closer in performance than last year. Galaxy S6 has a 16 MP sensor with optical image stabilization capable of recording video in 4K, while HTC left behind its 4 MP UltraPixel camera for a 20.7 MP traditional sensor.

Autonomy remains a problem for both smartphones, especially since battery technology does not seem to change much in the near future.

HTC One M9 and Samsung Galaxy S6 join the top smartphone segment using two different recipes. Galaxy S6 is characterized by numerous news regarding design, hardware or software platform, in order to remedy the flaws of its predecessors. Instead, One M9 keeps the design implemented two years ago, only bringing major changes to the camera.