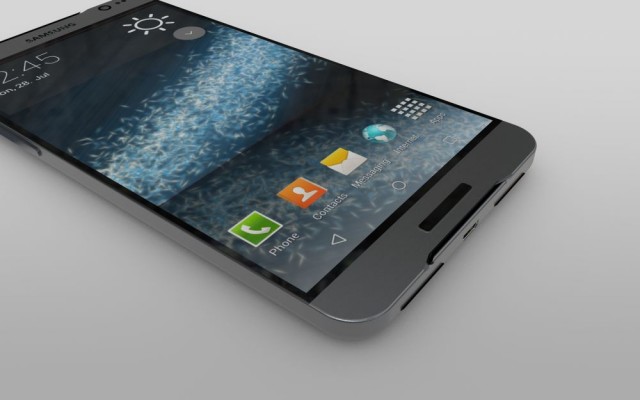 Samsung Galaxy S7 is one of the most anticipated flagships of the year 2016, going head to head to Apples’ iPhone 7. And there is a good reason to that, if we are to consider the resounding success and the innovations brought to the market by its predecessor the Galaxy S6.

Even if there is still a lot of time left until we will be able to purchase the new device, as the moment of its launch draws near, we are have a better image of what the device will have to offer with each day that passes. The newest images are highly suggestive in regard with the display that will be fitted onto Samsungs’ new flagship. Although the previously shown images indicated that we will have to deal with a phone almost identical to the Galaxy S6, in the picture below we can see that the proximity sensors and the front camera have been moved to the right and the home button as well, looks different than it did on the previous generation.

The list of specifications may include a 5.2 inch Quad HD display, Snapdragon 820 or Exynos 8890 chipset, depending on the country that the device is marketed, 4GB of RAM, 32 GB for base model and up to 64GB of storage space, with the option to extend the camera sensor up to 20 megapixels. Both the Samsung Galaxy S7 and Galaxy S7 Edge could be launched in February. Perhaps fans of Samsung tech giant hope that the new flagships will outperform the previous model, but so far, everything suggests that it could be a poorly modified version of Galaxy S6, as emphasized by Yahoo! Tech.