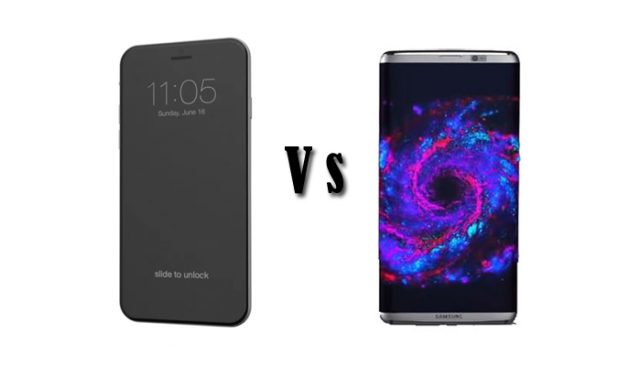 This year is going to be a great one in terms of tech devices, especially in the smartphone world since all major tech companies are getting closer to launching their upcoming devices. In fact, the whole world is waiting for Apple and Samsung to finally unveil their highly anticipated smartphone flagships. Right now the internet is filled with rumors and speculation about both devices and what’s really surprising is that according to rumors, both companies are taking the same route in terms of hardware and features. Today we’ll go together over the most recent rumors surrounding both devices.

Apple recently started making its devices water and dust resistant. In fact, the company’s latest flagship iPhone 7 has an IP67 certification but the upcoming iPhone 8 is expected to come with IP68 dust and water resistance rating. This move will put iPhone 8 up to par with Galaxy S8 which is certainly going to receive the same resistance certification because Galaxy S7 already has IP68. This means that both devices will be able to sustain water submersions of up to 1.5 for longer than 30 minutes.

Leaving water and dust resistance aside, let’s go into hardware specs. Rumor has it that Apple will launch the upcoming iPhone 8 in 4.7, 5.5 and 5.7 inch variants while Samsung will stick only to 5.1 and 5.5 inch variants. Having different models of their flagships, both companies will be able to launch affordable entry-level devices and high-end premium ones. Both devices have been reported to feature curved screens which feature slim bezels. Regarding the screen, Apple will finally put its iPhone at the same level Samsung’s Galaxy S series are by installing an OLED display.

Regarding features, both smartphones will come equipped with a USB Type-C port but even though Samsung is installing one, it will still keep the classic 3.5mm audio jack unlike Apple. Both devices will ship without a physical button. Instead of a physical button Apple will use its Touch ID fingerprint sensor, while on the other hand Samsung will install the fingerprint sensor underneath its display. Nonetheless, while these rumors have yet to be confirmed but MWC is just around the corner and that’s when Samsung launches its flagships.