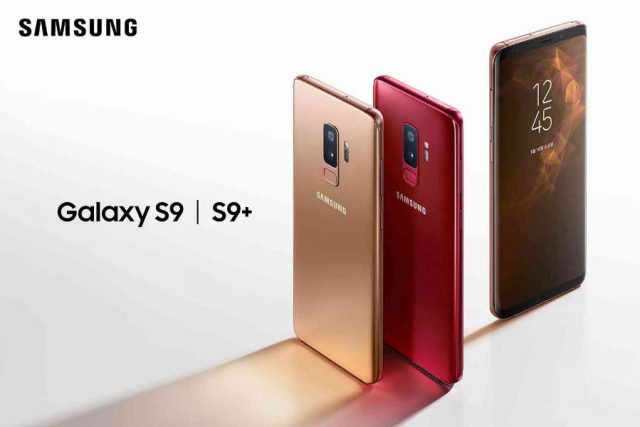 The Samsung Galaxy S9 and S9 Plus will soon be available in two new colors. This has been announced by the Asian firm, although for the moment they will be relegated to their home country of South Korea.

Samsung Galaxy S9 And S9 Plus Will Be Available Sunrise Gold And Burgundy Red, Also

In this way, the current black, blue and purple models will be joined by a Sunrise Gold (gold) and another model named Burgundy Red, which is a kind of very elegant burgundy.

Samsung has said that the burgundy red edition will go on sale on May 25th, while the gold version will be launched in early June but, as I’ve said, only in South Korea at the moment.

Both new colored devices will also land with a storage capacity of 64 GB. That is, they will not be available with 128 or 256 GB as the other colors.

There is no surprise in this move, however, as last year, the Samsung Galaxy S8 also wore burgundy red.

Color is the only thing that will differentiate them because, otherwise, the Samsung Galaxy S9 and S9 Plus, regardless of their color, will be exactly the same under the hood.

This year, the South Korean firm has made few changes in comparison with Samsung S8 and S8 Plus.

The Galaxy S9 has a continuous design compared to its predecessor. However, there is a more pronounced infinite screen with even smaller frames.

Both are powered by an Exynos 9810 processor with 10 nm and 6 GB RAM, with the exception of the Chinese and US Samsung Galaxy S9 and S9 Plus versions which boast a Qualcomm’s Snapdragon 845.

On the other hand, they also equip a dual-camera system on the back, Android 8.0 Oreo, and accumulators of 3,000 and 3,500 mAh, respectively for the Galaxy S9 Plus, with fast, wireless charging.

It is possible that the new Samsung Galaxy S9 and S9 Plus Sunrise Gold and Burgundy Red editions will eventually reach the European market and the US market, too. However, Samsung hasn’t said anything about it yet.