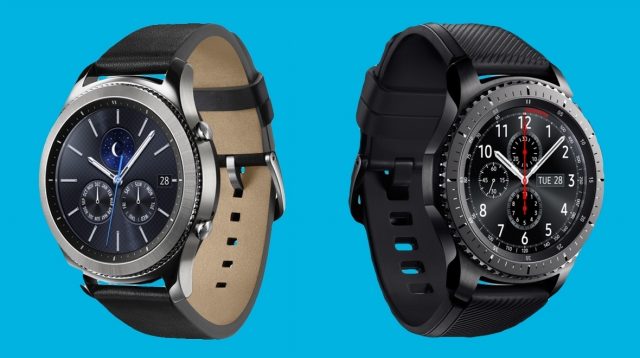 The wearable market is filled with fierce competition but the toughest one of them all is Samsung. The South Korean tech manufacturer has been meddling with wearable gadgets for a while now starting with Galaxy Gear to the latest Gear S3. Samsung’s latest smartwatch lineup comes in the Classic and Frontier variants and these gadgets are the most technology advanced wearable devices ever. Today we’re going to go over Samsung’s Gear S3 and see what they bring.

This is the first thing customers see when looking at a tech device and taking in consideration that these are wearable devices their design really matters. As its name implies, the Classic Gear S3 features a sleek looking design that’s been designed to resemble a real watch while the Frontier one comes with a rougher design because it has been designed for outdoor activities. Both of them ship with a circular and rotating screen that rotates smoothly. The circular screen is connected to a 22mm leather strap which features easy to release toggles. The toggles come in quite handy because users can replace the straps whenever they want.

Right now the majority of wearable devices run on Google’s Android Wear operating system but that’s not the case with Samsung’s Gear S3. These watches are powered by the company’s own Tizen operating system. While some readers might not have heard of Tizen before, we need to assure them that Samsung’s decision to go with Tizen and not Android Wear was the right one. Users will be surprised to find out that the operating system utilizes Gear S3’s side buttons, touchscreen and rotating bezel. Tizen comes with a bunch of watch faces which can be changed anytime by simply accessing the user interface. Regarding the user interface, the notification panel has been carefully integrated so that it’s easy to access and the app list can be accessed by pressing the bottom crown button. What really sets Samsung’s operating system apart is that users are presented with simple templates such as “yes” or “no”. Additionally, users can use the Gear S3 only through vocal commands.