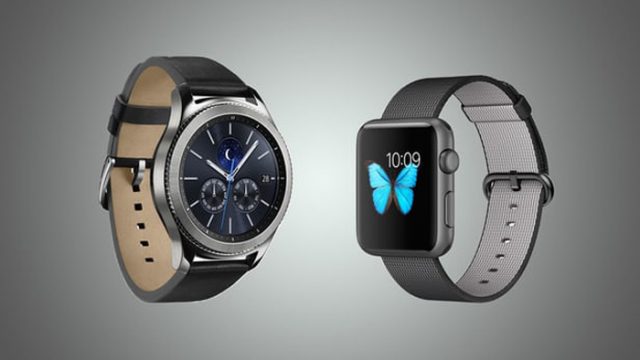 As everybody knows by now the two companies that go head to head with each other in the tech world are Samsung and Apple. These two major tech manufacturers seem to be competing in every tech departments and not only the smartphone one. During 2016 both of them have refreshed their wearable lineup with Samsung’s Gear S3 and Apple’s Watch Series 2. Today we’re going to compare them and see which one has the best design.

Because these are wearable devices their design is very important. Users will wear these devices on their wrist all day long and creating a good looking smartwatch is a key selling point. Apple seems to have found the recipe for success in terms of wearable design with its rectangular metal body, digital crown, removable straps, rounded glass and just one physical button. Samsung on the other hand is following the same removable straps trend and it’s also adding to that by having two variants of Gear S3.

The South Korean manufacturer made Gear S3 available in the Classic and Frontier variants. The Frontier one comes with a rougher looking design and that only because it has been designed for more outdoor activities while the Classic one features a sleek design which resembles real watches. Additionally both Gear S3 feature easy-to-remove toggles and these can be used to quickly replace straps.

In terms of durability and roughness, both Gear S3 gadgets are IP68 certified which means they are dust proof and can survive water submersion of up to five feet for thirty minutes. Apple isn’t as adamant about its Series 2 water and dust resistance, but reports have been showing users can swim with them in shallow waters without any worry.

Leaving the design aside, this is the second most import feature a smartwatch has. Both Samsung and Apple equipped their gadget with very bump and scratch resistant screens. Apple especially had to use special glass because the device’s rectangular screen made it more open to screen bumps. Nonetheless, Apple uses toughened Ion-X Glass and sapphire crystal depending on the Series 2 variant. Samsung’s rotating bezel has been coated in Corning Gorilla Glass SR+ which certainly has the same resistance as Apple’s glass.