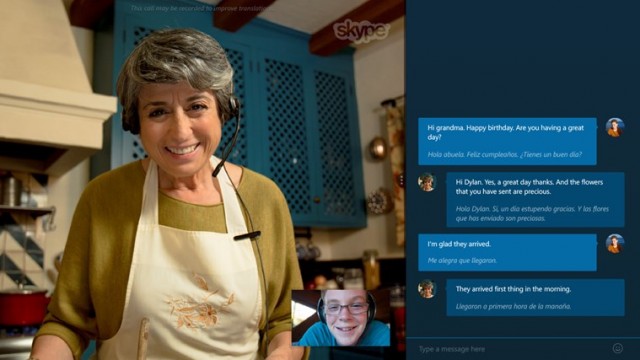 Just one day after another important announcement related to Microsoft service, we learn that the popular Skype application Translator, real time translation, has been integrated into Skype.

It’s already been a few years since the Microsoft began working on a teleconferencing system that allows you to talk with people from other parts of the world through a language translation system in real time. In a public beta, the efforts from the engineers in Redmond were reflected in Skype Translator. The latter was a standalone application offering real-time translation in seven languages.

In principle, even though it was not very difficult to see that the final destination of this feature was the popular Skype application, they opted for a separate application, because Microsoft does not have enough confidence in its reliability. Fortunately, all problems have been fixed and Skype Translator functionality is now present in the most recent iteration of the PC versions of Skype.

With this announcement that will make life easier for those who interact regularly with speakers of foreign languages, Microsoft has published some interesting statistics for Translator. Apparently, the most popular translation for English is French. The number of daily calls via Skype Translator increased by 400% compared to when launching the application. The more frequent it was used by Germans who wanted to communicate with people from Ghana.

Implementation beeing completed for the new features in Skype for Windows version, it is worth considering what you’ll gain completely free from this process. Basically, you will have real-time conversations translated with speakers of Chinese Mandarin, English, French, German, Italian, Portuguese or Spanish. Provided you know one of these languages, all combinations are possible. If you speak any other languages, including Romanian, you can have a conversation with a friend in a text format. For chatting 50 languages are supported.

In the future, those from Skype promised to work hard to add in a pretty spry rhythm many supported languages. To use Skype Translator, click on the globe in the upper right corner of the application.