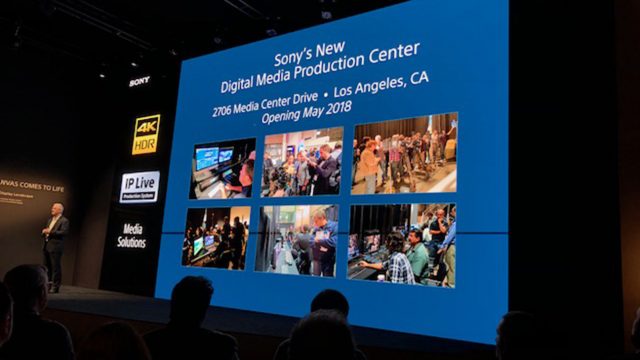 Sony is planning to open a new Digital Media Production Center in Glendale, California in May. This will be the company’s home to Los Angeles-based teams for training, gear, and education about the latest production technologies that include 4K and HDR capabilities.

The company’s plans for the new facility were revealed on Sunday, April 8, during the company’s NAB Show press conference in Las Vegas.

This happened at the company’s exhibition booth before an amazing 8-foot 4K Crystal LED display that Sony is promoting for broadcast or replacing the theatrical projection in cinemas. The stunning screen will be displayed again shortly during CinemaCon.

During the NAB Show, Sony also revealed that Fox Sports selected the modular Crystal LED display technology as part of its Moscow studio that will be built this spring for the FIFA World Cup.

The company also unveiled its new Venice large-format camera which was launched two months ago and is already being used on some commercial and TV work.

Sony said that cinematographer Sidney Sidell is also using one of these cameras.

8K technology is getting closer to reality

The notion of 8K was considered future technology, but it seems that it starts materializing. Sony revealed the UHC 8300 camera targeted at live production that can shoot 8K, HDR at 120 fps.

Japan’s NHK is already using the camera, and it’s testing its 8K broadcasting system and plans to launch it in 2020 for the Tokyo Olympics.

During the NAB Show, Sony also unveiled some jaw-dropping footage that has been filmed with the camera during 2018 Carnival in Brazil.

The company made sure to highlight the expanding line of camcorders with HDR and 4K support. Sony is increasing the large-format sensor category with the XDCAM handheld camcorder FS5 II with 4K, HDR, and 120 fps features.