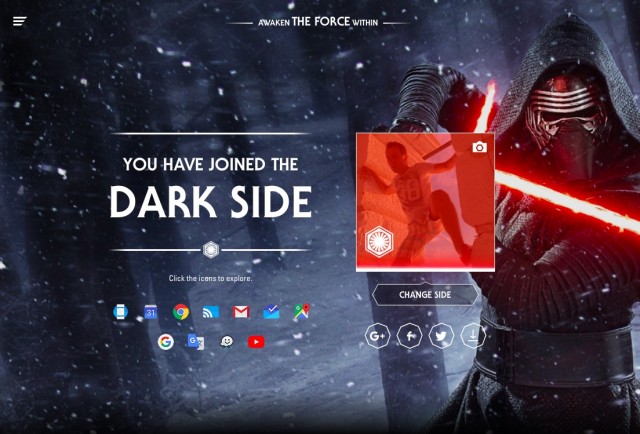 Google unveiled a partnership that will integrate with Disney’s Star Wars license in some interesting ways in its different services. The famous science fiction gets so integration within applications and web services provided by Google such as Chrome, Maps, Waze, Gmail, Calendar, YouTube and others, changing some design elements using a color scheme of your choice: dark for Sith fans and bright for those who prefer the Jedi.

To change the entire interface all at the same time, simply click the link google.com/starwars and choose a side. On the left is the Jedi Order, represented by the new character of the new film Star Wars: The Force awakens, Rey, and to the left are the Sith antagonists, led by Ren Kylo. Colors will be modified depending on the chosen camp, and certain symbols such as Google Maps arrow representing personal vehicle when used for navigation function can be changed into the space shuttle: Tie Fighter for Sith and X-Wing for Jedi.

Google.com searchers for the introductory formula of the Star Wars films, “a long time ago in a galaxy far, far away” can see the results displayed in style similar to that at the beginning of each episode of the series. All the links are still functional, even if it moves on the screen. It’s no surprise that the famous search engine has integrated this event in its appearance, same way it did with other events over time to mark various occasions.

The partnership between Google and Disney does not stop here. On December 2, Star Wars app on iOS and Android will offer all Google Cardboard users the opportunity to experience the films universe in virtual reality. Disney has developed a 360 degrees miniseries within ILMxLAB and will launch in December exclusively on mobile. It will be related with the events in the new episode, The Force awakens.

We’re less than a month away from the premiere of the new Star Wars movie, and the enthusiasm of the fans increases every day. Are you ready for the return of the science fiction universe created by George Lucas?