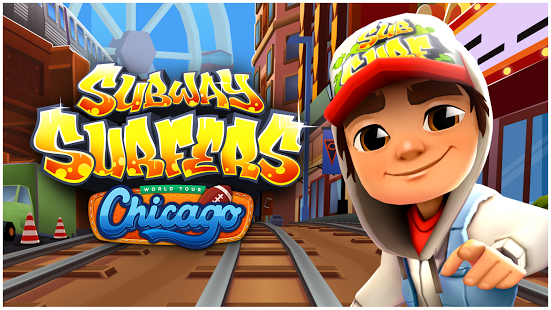 The player’s character has drawn graffiti on one of the train cars. The action was noticed by the inspector and his dog, so the chase begins along the railway tracks. The player has to accelerate, run as far as possible, jump over oncoming trains and pass overcoming obstacles. Players have to avoid bumping into something because then the inspector catches up with them and the game ends, no matter how far the character made it. Capture can be avoided if a surfboard is used during the collision. While you are running, you need to collect golden coins and various bonuses that will bring you advantages in the game.

Your missions consist of three tasks. Each mission accomplished increases the multiplier score by one point, making it easier to set new records. If you are connected to the Internet, you can perform daily tasks like collecting special words from letters scattered as bonuses on the railways. You get coins during the first four days of collecting words and day by day the prize amount increases. If all tasks are completed, during the following days gold boxes will be offered. Each new version of the game comes with an additional unique character, but unlocking it will require the player to pay 95,000 coins. The newest version hosts an additional unique Hover-board and for unlocking it for a limited time you will have to collect and pay 50,000 coins.

New games and applications with daily updates are available on the game portal AnGamer.