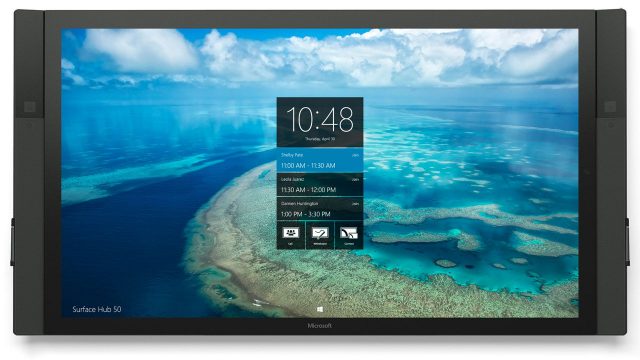 The next generation of Surface Hub, codename Aruba inside the Microsoft Headquarts, is planned to be released in the first half of 2018.

As a reminder, the Surface Hub is a giant 55-inch or 84-inch 4k smart display that can be mounted on a wall or a stand. This huge presentation TV sports a 4K 120Hz display with multi-touch and multi-pen compatibility, of course. It functions on the Windows 10 operating system. It was designed specifically for business class users.

It seems like the next-gen Surface Hub will have improved hardware and thus it promises better performance compared to the first version. Better software for it is being worked on, too, and it will have integration for Microsoft Teams.

Additionally, Microsoft promised a software feature upgrade will arrive this year for the existing Surface Hub.

In an interview for The Verge, a Microsoft spokesman told them the following: “Surface Hub created an entirely new device category and we’re thrilled with the strong momentum we have seen across the globe. We’re working on V2 and will share more in the first half of this year”

The pressure is high

At the moment of reading this article, the comapny Microsoft has over 5000 customers around the world, summed up from 25 different markets.

Unfortunately, the same spokesman also said that, at least for this year, Microsoft will not be able to fulfill the high demand of the Surface Hub, due to the difficulty in manufacturing the giant display. This is why we inform users that they can either get the original Surface Hub now or wait for Surface Hub 2.

Right now, as you can see, there is not a lot of information about the next generation of Surface Hub. An announcement is expected to be made at the Build 2018 developer conference, in May this year.

Do you use a Surface Hub? Will you buy the improved version? What do you think? Tell us in the comment section down below! As always, stay tuned for more news regarding everything Microsoft!