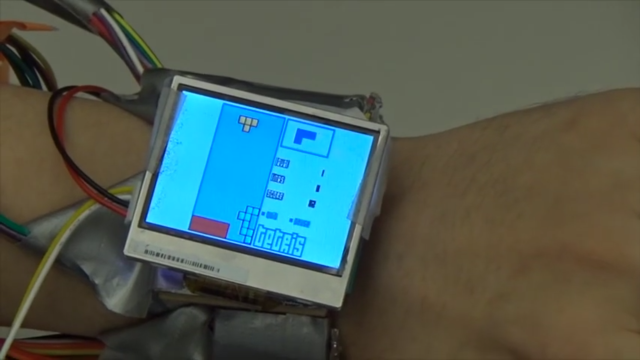 Smartwatches are some really useful tools that have been helping people keep in touch and made their tasks easier at jobs. They let you quickly respond to texts, reject calls you don’t want and all this without even pulling out the phone. However, you still need your both hands in order to use it, despite being marketed as easier to use than the phones.

However, Jun Gong, together with Xing Dong Yang, from Dartmouth, have designed WristWhirl, with some help from Pourang Irani, student at the University of Manitoba. After they analyzed the already existing smartwatches, they reached the conclusion that they should be easier to use. As such, the three students designed a different version: they included sensors into the wrist strap and lets you simply use your wrist in order to navigate with the device.

Moreover, they also included 12 proximity sensors running on infrared, plus a vibration sensor, and they glued it all to a simple plastic wrist strap. They added a 2-inch display that ran on an OS they themselves had created. The results of their experiments were really cool.

Though it may not seem much, this improvised device lets you rely on 12 gestures that open/close messenger apps, play games like Tetris, Fruit Ninja or scroll through the music, everything by just flicking your wrist.

According to the description they wrote about the watch, the cheap prototype they designed works 85% of the time with their human subjects. It is indeed little, if you consider a big experiment, but truth be told, these are some amazing results for their first draft. If they would receive some financing, they might even take the project even further, and maybe in a couple of years we might be able to play Tetrist simply by flicking our wrists in one way or another.