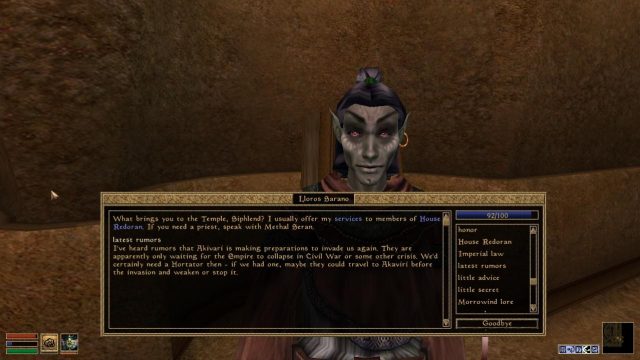 Even though the next installment in Bethesda’s beloved franchise is still far from being released, fans from all around the Internet are speculating and proposing what The Elder Scrolls VI (TESVI) might have for a plot, where it will take place and what kind of gameplay we can expect.

An Imgur user by the name of Stagsdale proposed this new theory based on the screenshot that can be seen above, where Bethesda hinted at TES6’s story all the way back in their third game, Morrowind.

The screenshot is of the NPC Lloros Sarano, located in Ald’ruhn, and he talks to the main character about a race of serpent-like vampires, the Akivari, who apparently are making preparations for Empire invasion! Lloros Sarano says this is likely to happen after a crisis, like “the Empire collapsing in a civil war”. Sounds familiar?

A Civil War in Bethesda’s universe?

Well, what Sarano is talking about is actually one of the storylines in “The Elder Scrolls V: Skyrim”. In that game, the Empire is facing an army of rebellious forces, the Stormcloaks.

The Empire, controlled in the shadows by a group of elves called The Thalmor, only acknowledge 8 gods and are letting the province of Skyrim to be populated by any race, not just Nords. The Stormcloaks, led by Ulfric Stormcloak, are claiming the recognition of a ninth human Nord god, Talos, and are seeking independence from the Thalmor and racial profiling against anyone who is not of Nordic descent.

There should also be noted that in TESV:Skyrim, the Emperor is eventually murdered by the player in a side storyline, thus weakening the Empire. Definitely a crisis, if we would say so ourselves.

In the lore, the events in Skyrim take place 200-odd years after the events of Morrowind, so Sarano’s prophecy is taking its sweet time. But if this theory is actually true, the plot of TESVI might actually involve the Hortator (who would be controlled by the player) fighting against an invading army of Akivari.

This is not the only case where games in the series were hinted at in previous iterations. For example, in the Tribunal DLC of “TESIII:Morrowind”, an NPC talked about how the gates of Oblivion would open and the Daedra would roam the world freely. And that is exactly what happens later in “The Elder Scrolls IV: Oblivion”.

Even with all this evidence, we cannot put our money on anything, as nothing is actually confirmed. There are lots of little dialogue pieces scattered through all the different games, and a theory could surely be made on each and all of them, so this specific one does not hold water. However, we can agree that leading a defence force against an invasion of snake vampires sounds tremendouly awesome, and definitely a good enough plot for the next game.

For more information and announcements about The Elder Scrolls lore, you can visit Bethesda’s official website.

With that being said, what do you think? Tell us your opinion on what the next game could be about in the comment section down below. And as always, stay tuned for more information regarding The Elder Scrolls franchise!