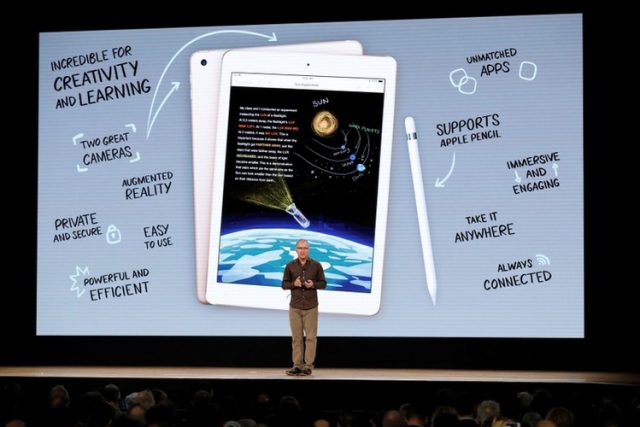 Yesterday, Apple held its education event at Lane Tech high school in Chicago, Illinois, and announced the launch of a new tablet, the educational 9.7-inch iPad (2018) with support for Apple Pencil. Also, Apple announced the release of an educational software for both students and teachers.

“Education is a big part of who we are as a company,” stated Tim Cook, the Apple CEO, during this education event.

Because it has been specifically designed to focus on educative programs, the education-focused iPad launched yesterday comes with a set of features to help both students and teachers in the process of learning and teaching, respectively.

According to Apple, there are more than 200 K apps on App Store that are educational and which can be used to study. Besides, Apple apps such as Notes, Pages, Keynote now support the use of the Apple Pencil.

An exclusive feature in the education-focused iPad (2018) is the Smart Annotation feature that permits students and teachers “write and add marks directly on the page itself,” according to Apple.

In terms of display, the differences are clear. The new iPad comes with a 9.7-inch and 2048 x 1536 resolution display, while the iPad Pro come with a 10.5-inch display with 2224 x 1668 resolution, TruTone, and ProMotion technology.

A big difference is observed when comparing the RAM as the iPad (2018) comes with only 2 GB, while the iPad Pro comes with 4 GB.

Also, in terms of internal storage, the education-focused iPad get two variant with 32 GB and 128 GB, while the iPad Pro gets three variants with 64, 256, and 512 GB, respectively.

The iPad Pro packs a rear camera of 12MP and a front one of 7MP, while the newly launched iPad has only an 8MP back camera and a 1.2MP front camera.

Education-focused iPad has a battery, though, packing an accumulator of 8,827 mAh with 693 mAh more than the battery of the iPad Pro.

In conclusion, Apple focused on creating an iPad that will be much affordable for student and teachers than the iPad Pro. Thus, the new education-focused iPad (2018) will cost only about $330 and will pack education-focused features and will also offer support for Apple Pencil, which, by the way, will have to be bought separately since it is not included in the package.