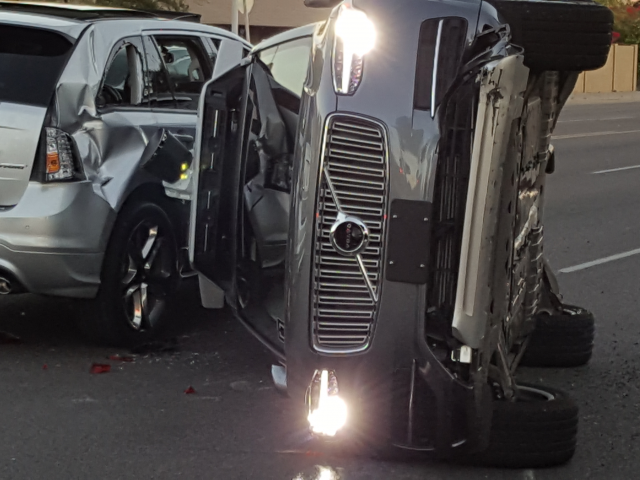 The past few months have not been a very good one for Uber. The company’s bad luck seems to never end since a new Uber crash has just happened in Arizona. The reason why this crash is so highly important it’s because a driverless car was involved in it. As everyone might remember, Uber launched its first pilot program in Pittsburgh. Seeing as the program was highly successful, the company started launching it in different states but this didn’t go as planned.

As previously mentioned, a pilot Uber car recently crashed in Arizona. There were two passengers in the car and fortunately no one was seriously hurt. However, the picture of the crash looked scary enough to force Uber to retract its pilot program. The pilot program has been pulled back from Arizona, San Francisco and Pittsburgh. We cannot know for sure if the program is ever going to be brought back, but we highly doubt it.

What caused the accident?

The accident wasn’t caused by the driverless car, but by a second vehicle that didn’t accord priority. Even though this isn’t the pilot car’s fault, a normal driver would have been able to avoid this accident by breaking or steering away. The worst thing about this crash is the fact that Uber’s self-driving Volvo SUV managed to land sidewise and damage other two cars. After taking a look at the picture, we can be thankful that the people inside the cars weren’t injured.

These cars are amazing and Uber’s decision to put them in wasn’t bad. However, even though these cars are able of driving on their own a driver is advised to sit in the front. This way, in case of bad weather or traffic the human driver can step up and take the wheel. Nonetheless, the past few months have been quite hectic for Uber. More than a couple of high-level executives have resigned and drivers have caused crashes all throughout the US. Let’s just hope that Uber is able to make a comeback in light of the recent crash.