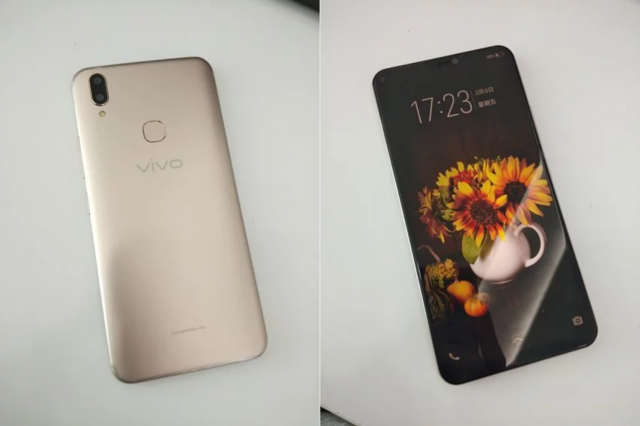 The launch of the new Vivo V9 has already been announced to happen in India on March 27th . This phone succedes the Vivo V7, which was launched in India in November 2017.

Before the official launch, leaked photos of the phone have appeared on the internet, which give us a clear look at its design. Vivo V9 seems to feature a 18:9 aspect ratio fullscreen display with a notch on the top, thus making it the first smartphone from this company to have a notch. Of course, this was already confirmed by the teaser image posted by the company.

Also, the leaked images show that the phone sports dual cameras on its back. Because of the thin margins, the fingerprint sensor is on the middle back, right above the company logo.

The dual cameras on the back are placed on the top-left corner, with a small LED flash just below them. In the teaser, it was revealed that the Vivo V9 has a 24MP camera on the front, too.

Additionally, the phone will have a 3.5mm audio jack at the bottom, next to a micro USB port. The phone will probably run with the Android Oreo OS preinstalled and with the company’s Funtouch UI software as an extra. Unfortunately, we don’t have any more information about the specifications of this phone.

As for the pricing, we would guess it will cost approximately ₹25,000 in India, which equals to about $385 in the United States. However, this is all speculation, and we must wait a bit more to find out exactly what the phone’s specifications are, how much it costs and where it is going to be available.

Are you excited for Vivo V9’s release? Tell us your thoughts in the comments! Also, stay tuned for more information!