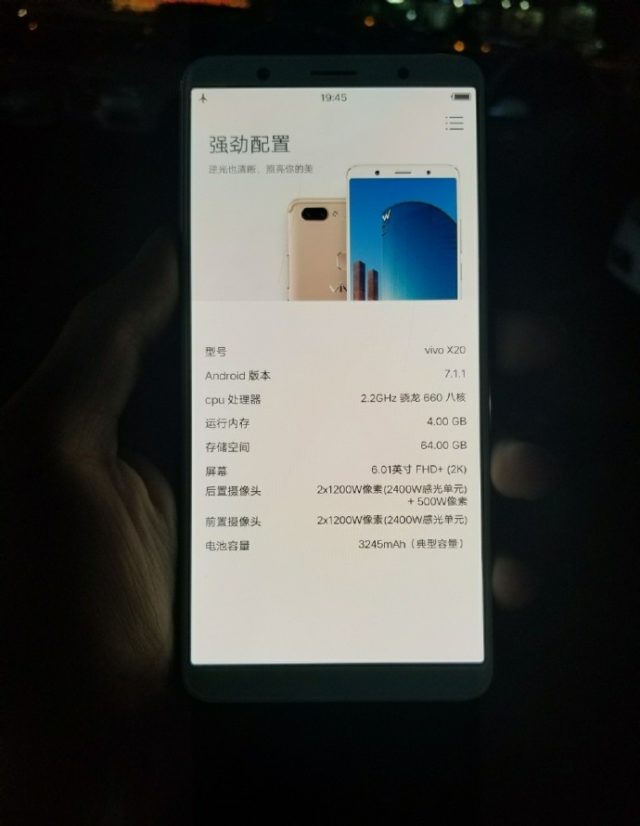 Vivo X20 is scheduled to be unveiled later this year, during October. Even though October is just around the corner, smartphone fans are not known for being too patient. Luckily for them, a recent live picture leak reveals Vivo X20’s bezel less design and full specs sheet. Numerous Vivo fans have been starting rumors about the smartphone’s specs but now, we don’t have to rely on rumors anymore.

As everyone can clearly see in the leaked picture, the smartphone will ship with a sleek looking bezel less panel. The display will measure in at 6.01-inches and it will use FHD+(2K) technology. This means that Vivo X20’s bezel less display will offer a high resolution of 1080 x 2160 pixels. We should also mention that the front 12MP selfie camera can be seen in this leak.

When it comes to processing power, Vivo X20 impresses us with Qualcomm’s Snapdragon 660 CPU. This processor features eight cores which clock at a maximum speed of 2.2GHz Kryo 260. As if the processor wasn’t powerful enough, Vivo coupled it with 4GB of RAM. Things get even better though since Vivo X20 also sports 64GB of internal storage space that can be expanded up to 256GB via a microSD card. Also, worth noting is that Vivo X20’s power is fueled by a rather large 3,245 mAh battery.

Considering that Google recently unveiled Android 8.0 Oreo, Vivo X20 was expected to ship with it straight out of the box. Sadly, this isn’t the case since Vivo X20 will run on Android 7.1.1 Nougat instead. While Android 7.1. Nougat is not a bad operating system by any means, it’s still not Google’s latest operating system. However, Vivo X20 will certainly receive an OTA (over the air) update once the final version of Android 8.0 Oreo is available for download.