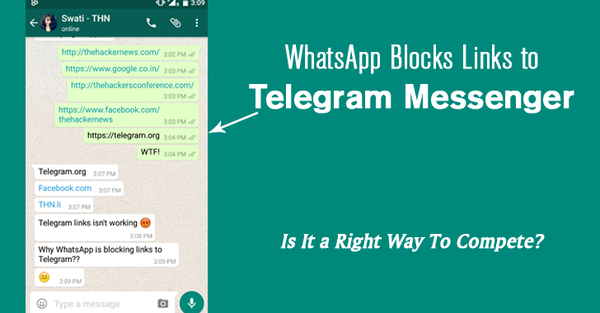 People using Telegram.me, a messaging app similar to WhatsApp, noticed this morning that they were unable to send links to the app via WhatsApp. Telegram.me is a rival chat app, which was launched a while ago and gained popularity due to previous WhatsApp outrages. Users noticed that they could no longer send links to Telegram.me via WhatsApp, the URLs appeared as a message, but the hyperlink was not working and users could not access the linked address by tapping the link. Even more, the message was treated like spam or malware, leaving you unable to copy the text and paste it on another app. The effect did not occur on every mobile device that had WhatsApp installed, but it was consistent on the same device, blocking links to chats in Telegram.me.

Telegram.me has looked into this matter and confirmed that this was happening due to silent update, launched this morning by WhatsApp, that has the same version name as the update that has rolled out a few days ago (2.12.367). This update has not yet reached every device that uses WhatsApp and this might be the explanation why the block doesn’t happen on all devices.

Blocking links is nothing new when we are talking about Facebook, the company that owns WhatsApp. They first faced criticism in 2010, when Facebook blocked links to Pirate Bay in their own messaging system, a long time after they have been blocking it in the news feed. More recently Facebook was criticized because it began blocking any mention of Tsu.co, a new rival social platform that shares revenues from adds with its users. Even so, with this kind of blocking strategies taking place for a long time on Facebook, this is the first time it happens on WhatsApp.

To most of its user this looks more like a purposeful move addressed to Telegram.me and less like unintentional glitch. Telegram.me has no worries about this taking place and states that they are expecting Facebook to back down after all of the focus of media attention on this matter. Facebook and WhatsApp did not give an official statement related to the matter.