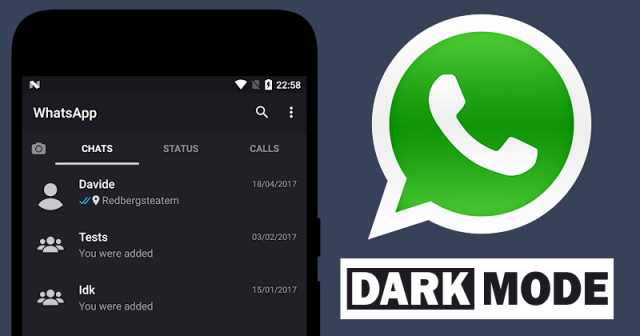 We have some great news for WhatsApp fans! The developers who are in charge of WhatsApp have announced that they are working on a Dark Mode. YouTube recently rolled out Dark Mode for the Android version of YouTube and the new feature has been well received. Well, it looks like this inspired WhatsApp’s developers to do the same.

Even though the Dark Mode feature is not a groundbreaking feature by any means, it’s really nice to have. People who work night shifts will find that having an app in Dark Mode will make it easier on their eyes and they will not need to turn down the smartphone brightness level.

Dark Mode will make WhatsApp a better app for people who love chatting online because it will help protect their eyes. We should also note that there are many people who simply love the design change that the Dark Mode brings and this is also one of the main reasons why WhatsApp’s developers are currently working on one.

How to Get Dark Mode WhatsApp?

The good news is that Dark Mode for WhatsApp is coming soon, the bad news is that we don’t know when. Therefore, the only way WhatsApp fans can get their hands on the highly anticipated feature is to enlist in the beta program and get all the latest APK (Android Package Kit) updates.

Since we are talking about APK updates, we need to inform WhatsApp users who are looking to get in the Beta program that this type of updates need to be manually downloaded and installed. Not just that, but the “Unknown Sources” feature needs to be enabled as well

While we might not have any official confirmation for when WhatsApp’s Dark Mode will be released, we think that this feature will be released during the next couple of weeks. The reason we believe this is going to happen is because WhatsApp’s developers are constantly launching new updates.