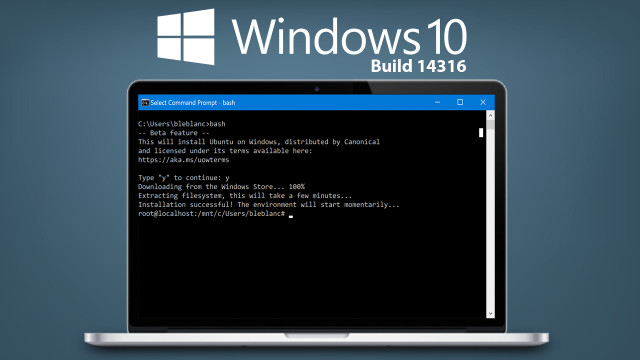 Microsoft celebrated the Windows 10 Anniversary by releasing the beta build 14316 on the 6th of April, known previously as Redstone R1. Prior to the release, a few unimpressive teasers were made public but the only one disserving the attention was the added Edge Extension. However, the final build has numerous interesting new features.

Among those features is the Group Policy options that enable the user to control how and when a particular update can be applied, thus solving one of the features we all dislike about Windows 10 which are the forced updates. It’s worth mentioning the stability of the build and that it poses no problems when tested for several hours.

However, there were many bugs discovered in third party applications, an accessible but blocked feature – Cortana on the lock screen and other several small inconveniences.

Several tech bloggers offered an incredible amount of information after testing the build. Gabe Aul for example, runned Bash on Ubuntu on Windows and said that Cortana will bridge the gap between PCs and smart phones if it is installed on an Android phone.

Some new significant extensions are available for Edge such as Pin it Button and One Note Clipper, there’s a new Universal Windows Platform/Metro Skype app and some adorable new emojis, that include caricatures with modifiable skin tone.

The Action Center allows users to give individual apps priorities and to limit the amount of notifications posted by an individual app. Therefore, if you chose the “top” option, their respective notifications will appear higher on the list. Although it was hinted at during the Build 2016 demonstration, there is no way to sync the Action center across PCs and phones yet.

Furthermore, Aul presents the new dark mode color settings which Windows Explorer does not inherit and there are improvements to the battery settings and the Feedback App. He also mentions a new Connect app that lets you use Miracast which allows you to cast to other PCs and Miracast adapter that allows you to see your phone’s screen on your PC. There is more information on these aspects in the official statement.

There are many things that Aul did not include in his analysis such as the fact that Microsoft Edge is becoming a more efficient browser. For starters, it now supports drag-and-drop folders and the “back” button is functional.

Not only that, but the Bash command line works once it’s installed, but only on the 64-bit build 14316.

Other modified settings options regard the “Show file name extensions” and “Show hidden and system files” that have moved from Control Panel to Start. Active Hours can be set to a maximum of 10 hours and „Hey, Cortana” can be made to work and there are many hacks online that can show you how.

Another tech blogger, @teroalhonen said that some setting in the Group Policy editor can help with the forced updates, but those solutions are yet to be fully documented.

Woody Leonhard from Infoworld has found that there are complaints about Tweetium and Classic Shell and that the new Start menu did not make it into the build, but it is expected to be included very soon.

Finally, there are many other features that are rumored to be accessible after the Updates that may make the Windows 10 better than its best predecessor, Windows 7: various features of live tiles, hot notifications, Apple-style handoffs with Project Rome.