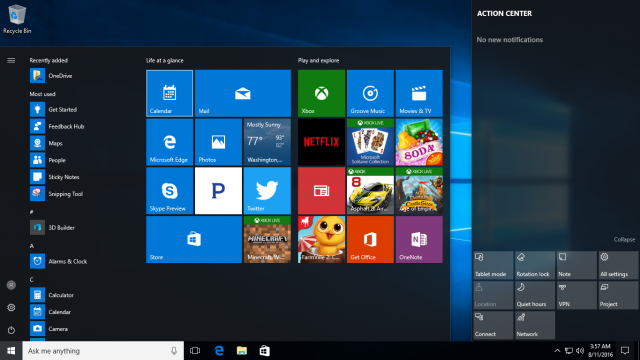 The highly anticipated Microsoft eBook store has finally arrived alongside Windows 10’s Insider Preview Build 15014 that’s available for both smartphones and PCs. That’s not all that Build 15014 brings, the update also includes a couple of power-management improvements as well. The power management features are actually more important than the eBook store because users will be able to clear their unused disk space and enhance their device’s hardware performance.

Microsoft’s Creators Update has been set to arrive to the wide public during late spring and it will completely innovate the way Microsoft’s eBook store functions alongside other functionalities. It’s great seeing that Microsoft is paying more attention towards power management because until this update came, Windows users could only access these functionalities through the Control Panel. In fact, from the Control Panel Windows users can set their device’s performance to be more “balanced” so that battery life is optimized or to “high-performance” but those features can be hard to find sometimes. The main change is that these settings will be found right from the middle of Windows 10’s Taskbar.

Sadly, the Insider Preview Build isn’t available for every Windows 10 user at the moment, but it will soon make its way around the world during the upcoming months. The reason behind this is that Microsoft is still tweaking the new user interface by adding PC performance settings to it. We can expect that the new Windows 10 “Game Mode” will be included in the Build 15014 patch.

Now onto the eBook store, Microsoft’s is competing with Amazon in this department and Amazon has a big lead. Microsoft’s wants to revolutionize the way eBook stores work by not adding dedicated book apps and in stead use Edge’s Reading list. The way this system will work is that when a customer decides to acquire a book from the store it will be available in Edge’s Book listing. Additionally, Microsoft has added a bunch of book reading features to its own artificial intelligence assistant Cortana. Windows 10 users will be able to ask the personal assistant to define words or even give context to them. Maybe Microsoft will keep on tweaking Cortana so that she can be used as a book reader as well.