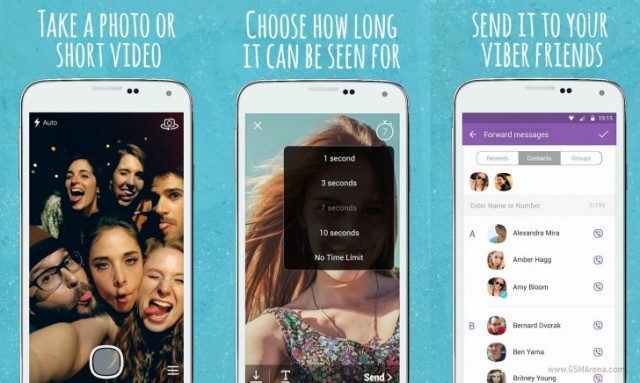 Although you have a surprisingly varied number of ways you can have a conversation on the phone, the developers from Viber decided that there is room for one more. The latter, called Wink is similar from one point of view with Snapchat. Basically, it borrowed the concept of temporary messages that made popular that application.

With the help of the new Viber Wink free, you can take a picture or a video and you can send it to a friend. As you can see in the photos available, the one who has captured the static or moving content will decide for how long it will be available on the recipient’s phone. After time runs out, the clip or photo will destroy itself. In order not to frustrate users who want such a function, you can send all kind of permanent contend via Wink, without an expiration date. In the end, it is up to you what you choose to use the app for.

“Take a picture or shoot a video with Viber Wink, save it to your gallery or associates a timer and share it via Viber. Once the recipient will see the message, it will disappear”. In other words, Viber Wink is not necessarily a standalone messaging app, but rather an add-on for Viber.

After all, to take advantage of the new Viber Wink feature, you need to install the latest version of Viber. If you passed this step, it remains only to download Wink from Google Play or iTunes AppStore, depending on the operating system of your smartphone.