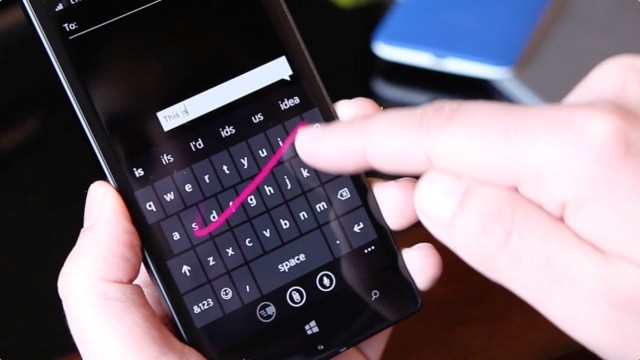 Lately, Microsoft has released several applications for iOS and Android mobile platform than its own Windows Phone / Windows 10 Mobile platforms. The next application that it will launch is dedicated to Apple’s operating system, and it will add a new keyboard similar to that of Windows Phone on iPhones. We are talking about the Word Flow app, which is preinstalled on all Lumia devices, which could facilitate a smoother transition for users from Windows to iOS.

Word Flow offers possibilities of normal typing, pressing each button individually and functions like “swipe” to “draw” the words. Also, Microsoft keyboard has AutoCorrect function and the form of the buttons is similar to those found on Windows Phone. To install the Word Flow on iOS at this point is necessary a account on Windows Insider and an iPhone 5S or newer, but those who want to enroll now do not benefit from guaranteed access. Probably Microsoft wants to test the new software first with a limited number of users, being able to detect problems and solve them before the keyboard is launched in the AppStore.

A version for Android was not confirmed for now and but the company’s launches in the past suggest that we will soon see the launch of the app on the platform from Google. With rumors about the possibility of limiting the Lumia series of smartphones to less performing models and bringing some features that initially were exclusive on Windows Phone platform, such as as Cortana and now the Word Flow keyboard, looks like Microsoft is not trusting its own operating system for mobiles anymore and tries of to create a more impressive presence on its competing platforms.