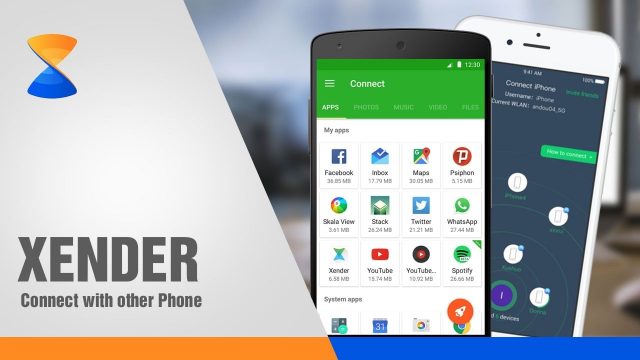 If you are the type of person who enjoys sharing files with your friends and family members, then we have just the perfect app for you. The app we are talking about is called Xender and its renowned for being one of the world’s best file sharing apps.

We should mention that Xender can be used to share all types of files which makes it ideal for people who work in environments where they need to transfer important files such as Word documents, Excel spreadsheets and so on.

Considering the fact that we are talking about an app which excels at sharing files, it shouldn’t come as a surprise that Xender is super fast. The developers who are in charge of Xender know that no one likes waiting minutes on end for files to share and they optimized the app’s software so that it can transfer files at speeds that reach up to 40 Mb/s.

Bluetooth is the traditional way of sharing files between smartphones, but no one is going to use it anymore after learning that Xender is 200 times faster! Yes, Xender’s top speed of 40 Mb/s is 200 times faster than what Bluetooth can offer and this makes it a great contender to replace Bluetooth.

There are many apps which claim that they can share files at similar speeds like Xender does, but all of them pale in comparison with Xender. The reason we are saying this is because nearly all those apps require a stable Wi-Fi connection or mobile data in order to be able to share files.

On the other hand, Xender doesn’t need anything else than that the two smartphones which are sharing files to be close to each other. Xender uses the NFC port of smartphones and this makes it possible for the app to share files without needing a USB cable or internet connection.

However, Xender can also be used to share files through Wi-Fi and this comes with lots of benefits. There are many situations in which there is a stable Wi-Fi connection around and Xender fans should make sure to use it because it will allow them to transfer files at a speed that is much larger than usual and to also send multiple files at once.

The fact that Xender is a cross platform app also means that people can share files with whoever they want. Usually, Android and iOS fans are restricted from sharing files with each other but now that Xender is here, that operating system limitation is removed.

Another great feature that gives Xender an edge over its competition is the fact that it supports all types of files. Therefore, Xender fans will be able to share any type of document, picture, video or even an installed app with whoever they want.

If you are planning on changing your smartphone, then you might need to consider using Xender. This app comes with a special “Smartphone Replication” feature which automatically transfers all SMS, contacts, pictures, games, music and all other types of files from the older smartphones to the new one.

These are just some of Xender’s highlight features, but the app can do so much more than that. For example, Xender comes with a highly optimized File Manager which makes it easier for people to view, move or delete any file they want.