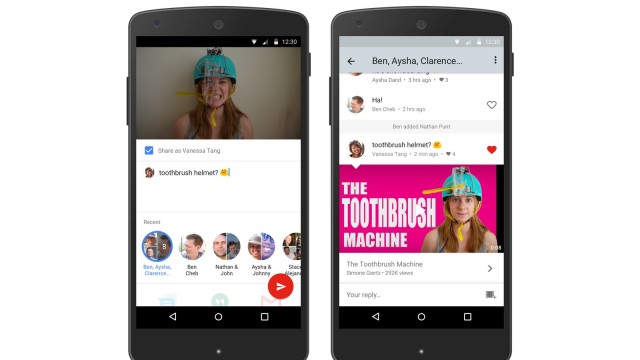 Yesterday, YouTube has started testing out a new feature which is actually a messaging service that will be integrated into the mobile app and will allow users to share embedded YouTube videos directly in the chat window, without needing to open a messaging app and copying and sending links there.

There are millions of people accessing YouTube every day to watch music videos, movie trailers, live streams, funny videos with animals and more, and they want to share them with their friends, but until now, the only way they could do that was through messaging applications such as WhatsApp, Viber, Skype etc.

Users can comment on any video on YouTube, but those threads are not ideal for having conversations, especially if people want to talk about private things and don’t feel comfortable sharing information in the eyes of everyone. So, YouTube’s developers thought about changing this and they decided to build messaging directly into the mobile application. This new feature will please many users, who will now have private conversations within YouTube app and send links to their friends.

The native messaging feature went live for a small group of users, but in the near future, it will roll out to the rest of YouTubers. They will see a new messaging tab where they will see all their conversations with their friends, they will be able to create group chats and share any links they want.

YouTube, Google and content creators will have much to gain from this change, because if users will spend more time watching videos in the mobile application, they will generate more ad revenue for Google and companies will promote their products to their targets. We believe native messaging within YouTube is a good idea and it will catch on pretty fast, and it’s a matter of time until it will be available on all mobile devices.

YouTube was launched in February 2005, being created by three former PayPal employees, but one year later, the video-sharing website was purchased by Google, for $1.65 million.