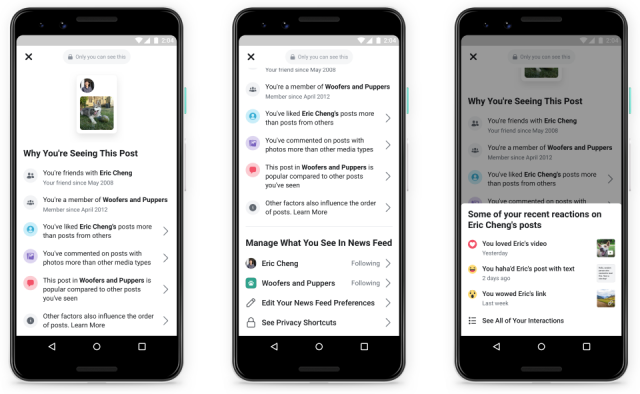 Facebook went through a couple of scandals related to user privacy during the last year and Mark Zuckerberg was even asked to join US lawmakers for questioning. The only good thing to come out of that fiasco is that Facebook now knows its users are not feeling safe on the social media platform anymore and Facebook is trying to change that.

With that said, Facebook has announced today a new feature called “Why am I seeing this post?”. This feature is designed to make it easier for Facebook users to control their newsfeed and today we are going to take a closer look at what the new feature can be used for.

”We’re introducing “Why am I seeing this post?” to help you better understand and more easily control what you see from friends, Pages and Groups in your News Feed. This is the first time that we’ve built information on how ranking works directly into the app,” said Ramya Sethuraman who is Facebook’s Product Manager.

The new feature makes it possible for users to tap on posts or ads that appear in the News Feed and then find out why they are there. This is a useful feature that lets users of the social media platform understand what Facebook knows what about them and to also personalize their news feeds at the same time.

“During our research on “Why am I seeing this post?”, people told us that transparency into News Feed algorithms wasn’t enough without corresponding controls. People wanted to be able to take action, so we’ve made it easy to manage what you see in News Feed right from this feature,” added Ramya Sethuraman.