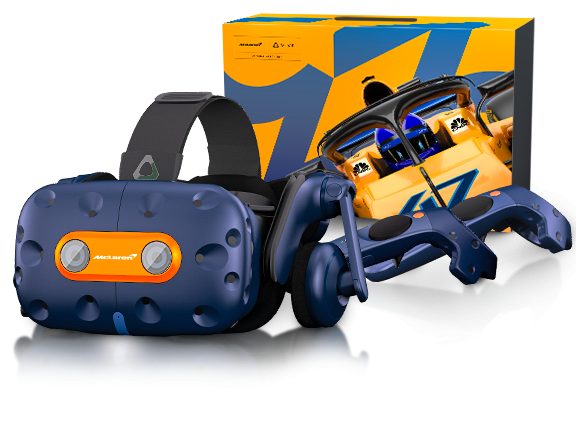 Everyone was surprised when HTC announced that it will partner with McLaren back in May. The two companies signed a multi-year contract and no one knew why. However, HTC has made an announcement today it shows us why this partnership makes sense. HTC revealed today a special edition of the Vive VR headset that is designed for Formula One fans. The headset is called Vive Pro McLaren Edition and it looks amazing.

The new VR headset focuses with a blue and orange design that is the signature design of McLaren and it also features a menu button and strap controller. The Vive Pro McLaren Edition bundle is priced at $1,549 and it ships with the Vive Pro full kit. There’s also a cheaper version of Vive called the Starter Kit.

The cool thing about Vive Pro McLaren Edition is that it also features two McLaren VR experience apps that are usually exclusive to Viveport subscribers. One of the apps is called “Factor 2 McLaren Edition” and it’s a racing simulator that gives Formula One fans a glimpse of what being inside a championship race feels like.

To make things even better, the app uses all of Vive Pro McLaren Edition’s hardware power and it features dynamic weather conditions, real-road technology that make it seem like the car’s tires are gripping or sliding and a high-end immersive sound experience.

The second app that people who purchase the Vive Pro McLaren Edition will get access to is called “McLaren Garage VR Experience”. As the app’s name clearly implies, Formula Fans can strap on the VR headset and get to play around with supercars while taking on the role of a tire mounter, tire gunner or tire demounter. This app also lets Formula One fans track their fastest records so that they can compete against their friends.