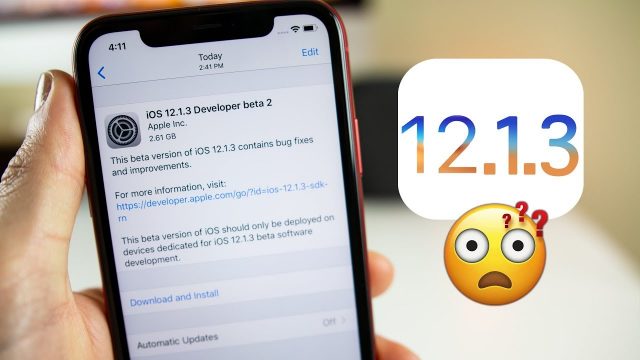 If you are an iPhone user and you are thinking about downloading and installing Apple’s latest beta update for iOS, then we highly advise against it. Even though most operating system updates introduce software tweaks, bug fixes and new features, this is not the case for the latest iOS 12.1.3 beta update. This is a beta update after all and therefore, it should come as no surprise that it comes with its fair share of bugs.

“@AppleSupport PLEASE, FIX iOS 12, 12.1.3 is killing my Wi-Fi connection, and my Wi-Fi is WORKING FINE, on my other devices, and my cellular isn’t as bad as other in this update, but it still freezes and lags too much. Please tell us you have a fix!” said an Apple fan over Twitter.

From the looks of it, the iOS 12.1.3 beta update causes iPhones to have problems when connecting to Wi-Fi and mobile data. This is an important issue and this is why we advise all iPhone users who are enlisted in the beta program to stay away from the new update, at least until Apple announces that a bug fix is going to be released OTA (over the air).

How to Fix the Issue

On the bright side of things, there is a quick fix that can help iPhone users who are having issues connecting to Wi-Fi and mobile data. The only thing that iPhone users can do is to enable AirPlane mode and then disable it after a couple of seconds which will force the Wi-Fi, mobile data and cellular support to connect again.